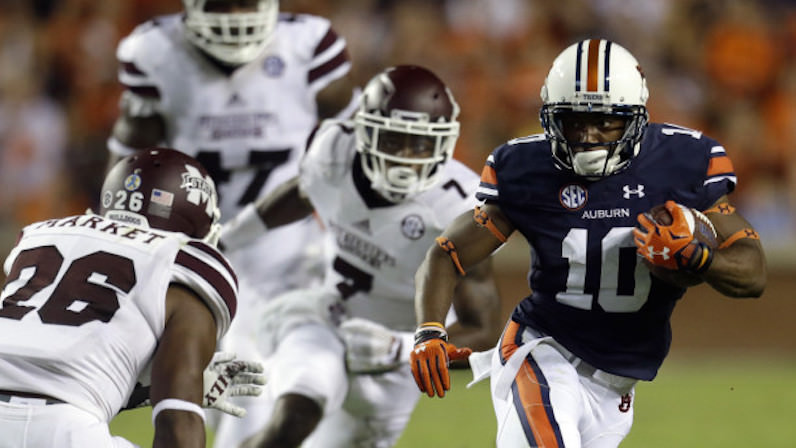 Over the weekend, North Carolina landed a commitment from Auburn graduate transfer Stanton Truitt, which appears to be a boon for the Tar Heels.

This is a football team that’s losing a lot of firepower on the offensive side of the ball. That’s no secret. Mitch Trubisky, Bug Howard, Mack Hollins, Ryan Switzer, T.J. Logan, Elijah Hood. Those are really good players, and they are all gone. As Larry Fedora turns the page and hits the reset button on his complement of skill-position players, Truitt looks like someone who could help bridge the proverbial gap.

Truitt, who has two years of eligibility remaining and can play right away, was labeled a wide receiver out of high school, when he was a 4-star prospect. However, he has the versatility to move around the field. In 2016, Truitt moved from receiver to running back and helped the Tigers run for better than 271 yards per game — No. 6 in the nation.

Truitt played in 10 games in 2016, and while he was not used heavily, there are some promising signs to consider. Truitt caught seven passes for 100 yards and a touchdown on just nine targets, per Football Study Hall. This translates to a catch rate of 77.8 percent and a yards-per-target average of 11.1 — both of which are rather efficient.

However, as Truitt transitioned to the backfield, he saw more action on the ground, carrying the ball 31 times for 187 yards and two touchdowns. According to cfbstats.com, six of Truitt’s carries went for 10 or more yards. He also picked up eight first downs on the ground for the Tigers.

Truitt averaged 5.6 Highlight Yards per Opportunity, per Football Study Hall, which ranked fourth among seven Auburn players to receive 15-plus carries. That stat showcases that when Truitt received sufficient blocking, he was able to gain close to an additional six yards per carry.

The departures of Switzer and Logan mean North Carolina is down two of its key playmakers in space. Truitt has experience lining up all over the field in the country’s second-best football conference, the SEC. He could fit nicely into Fedora’s spread offense and give whoever is “under” center a reliable threat on the perimeter.