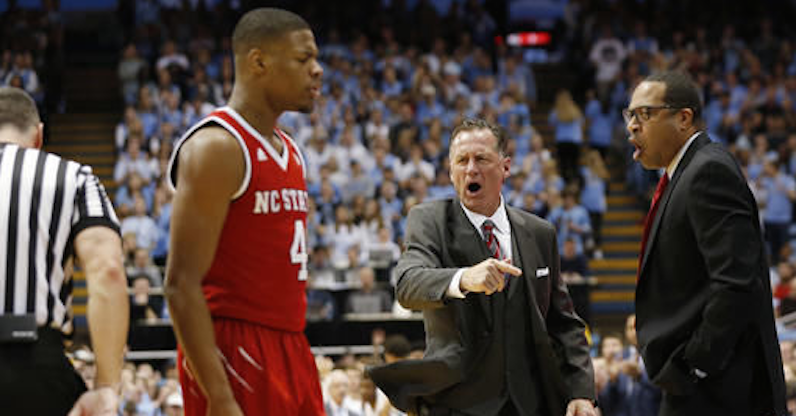 NC State has given up over 100 points in two separate games this season. (AP Photo).

The fraying around the edges was obvious early on — NC State was going to have problems on defense this season.

That became evident during the Wolfpack’s fourth game of the season: when Creighton put up 112 points against the Wolfpack in a historical drubbing. It was the second-most points NC State has ever allowed in a game, and according to KenPom.com, the Bluejays scored a ridiculous 1.4 points per possession.

A little over a week later, the Pack suffered its second loss of the season. Illinois scored 1.22 points per possession en route to dropping 88 big ones on NC State.

Following the loss in the ACC/Big Ten Challenge, State ripped off a six-game winning streak as the offense, led by Dennis Smith Jr., feasted on mostly inferior competition. All six of those wins came against teams outside of KenPom’s top 130.

Once conference play fired up, though, the Wolfpack started to cave again on defense, quickly. Here’s a look at those four performances; it’s not challenging to spot the one win, which came against Virginia Tech.

The Wolfpack has allowed better than one point per possession in all three conference losses, including the two blowouts against Miami and UNC when the Hurricanes and Tar Heels both scored better than 1.2 points per possession. In those two games, the Pack also allowed opponents to snag rebounds on more than 40 percent of available offensive rebounding opportunities — a disastrous number.

North Carolina, for the sake of comparison, leads the nation in offensive rebounding rate at 42.1 percent.

Even in the lone conference win this season, NC State still allowed Virginia Tech to make 13 three-pointers and score 48 points in the second half. In the words of Scooby Doo, ruh roh. If not for a ridiculous performance from Smith — and 42 combined points from Abdul-Malik Abu and Terry Henderson — Mark Gottfried’s club could easily be 0-4 in league play.

When NC State desperately needed a stop Wednesday night against Boston College, it had nothing down the stretch. Simple pick-and-roll defense is a mystery; switches are botched while rotations remain idly slow and lapses in communication linger. Live-ball turnovers did the Pack in as well — the Eagles scored 23 points off of turnovers. This has been a theme in conference play, too.

Points off of turnovers:

According to Synergy Sports, NC State gives up 1.036 points per possession in transition, which ranks 225th in the nation. And with regard to pick-and-roll defense, the Wolfpack is 245th in the nation, per Synergy, in points allowed per possession on sets that end with a roll man finishing — 1.045. These are serious red flags.

Gottfried is in the midst of his sixth season at NC State. During his tenure, the Wolfpack has never finished inside the top 75 in defensive efficiency rankings. In three of those seasons (2012-13, 2013-14 and 2015-16), State finished No. 120 or worse in points allowed per 100 possessions.

The 2016-17 season is far from over. There is still time for the Wolfpack to cobble together a résumé worthy of NCAA tournament consideration. However, that will require a major overhaul on the defensive end, and the ACC is a minefield. NC State is a wonderfully talented team, but one of the youngest in the nation, and dropping games to Boston College is something you just can’t do if you want to dance come March.