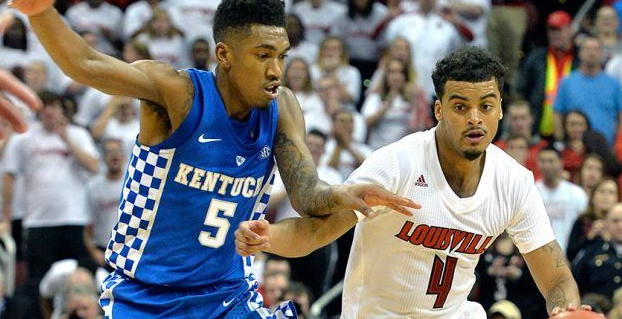 Louisville hosted Kentucky last week in a game that featured multiple future NBA lottery picks. The best player on the floor, however, was a guy you won’t find on a single draft board at the moment: point guard Quentin Snider.

In the battle of the Bluegrass State, the junior guard took over — 22 points (8-of-13 from the field) and five assists — as the Cardinals upset the Wildcats. For his efforts, Snider was named ACC Player of the Week.

Beyond that individual achievement, Snider’s play has been on the uptick recently. He started 24 of 31 games for the Cardinals last season, but as he emerged into a lead backcourt role in 2016 — alongside the dynamic Donovan Mitchell — his shot just wasn’t falling at the start of his junior campaign.

Louisville won eight of its first nine games — the only loss coming against now-No. 4 Baylor — but Snider had his difficulties. Here’s a look at his production during Louisville’s start to the season.

The per-game totals are pretty good, but the shots simply were not going through the rim. In the last three games — wins over Texas Southern, Eastern Kentucky and Kentucky — Snider has ripped nets with ease.

Snider was especially dominant in the win over Kentucky. The 22 points were a career high and the most anyone for Louisville has scored this season.

The junior point man was dominant in a variety of ways for the Cards. He found Mitchell in transition for a catch-and-shoot three; then, later in the game, Deng Adel hit Snider for a wide open trey on a breaker.

Most of Snider’s damage, however, came in the half court. Louisville involved Snider in a healthy amount of dribble handoff action, which he used to curl into a catch-and-shoot three and then later on a midrange pull up. The Cardinals frequently punctured the Wildcats when they simply flattened things out and let Snider cook in their pick-and-roll game.

Half of Snider’s 10 made field goals came from the right-handed guard dribbling into a high ball screen set by a Louisville big man — usually Jaylen Johnson or Mangok Mathiang. When Kentucky went under the screen, which De’Aaron Fox did with one minute left in the first half, Snider buried a three-ball. When Kentucky tried to unlock its inner Golden State Warriors and switch across screens, Snider twice took advantage of a bigger defender — Bam Adebayo.

On the possession following the made three over Fox, Adebayo switched onto Snider. As the clock ticked down, Snider dribbled left, then spun back right for a tasty layup.

His pièce de résistance came in the final moments of the game. With under two minutes remaining and Louisville clinging to a four-point lead, the Cardinals ran weave action into yet another pick-and-roll. Adebayo switched to Snider, who pulled the ball back out after recognizing the mismatch and unleashed a series of dribbles that would cost even Kawhi Leonard some sleep.

Snider crossed right, then crossed back left before hitting Adebayo with a hesitation dribble that caused the star freshman to momentarily lose his balance; Adebayo had to use both hands to prevent himself from toppling over, but by that point it was far too late. Snider had already smoked past him and was in the process of dropping in the dagger with 1:44 left in the game.

No. 6 Louisville opens up conference play on Wednesday when it hosts another Top 25 team — No. 12 Virginia. This game will give Snider another opportunity to show his improvement — from Year 2 to 3 — when he goes against London Perrantes, one of the most experienced and efficient point guards in America.

Snider will continue to bring his lunchpail to the office every game; Louisville currently rates as the most efficient defensive team in the country, according to Ken Pomeroy. But if the Cardinals can get this type of offensive performance from their point guard, then they will be a force to be reckoned with over the coming months.