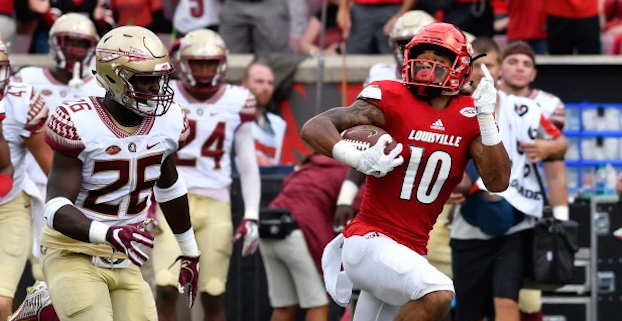 Jaire Alexander took back a punt 69 yards for a score against Florida State. (AP Photo).

Multiple stars have emerged for Louisville as the Cardinals push toward what could become to greatest season in program history.

Everyone knows Lamar Jackson; he’s been the best player in football.  Jackson’s joined in the backfield by running back Brandon Radcliff, who is second in the ACC in yards per carry (8.1).

Senior receiver James Quick (17.1 yards per catch, four touchdowns) has lived up to his prep All-American billing. Josh Harvey-Clemmons has patrolled the defensive side of the ball (44 tackles and a sack) with range and tenacity.

All of these guys were mostly known commodities before the season started. One guy, however, who didn’t fit that category is defensive back and return maven Jaire Alexander.

Anyone who closely watched Louisville’s rout of Florida State will remember this play that took place less than a minute into the second half:

Bang, just look at that. The game was already slipping away from FSU, but Alexander stuck the proverbial nail in the coffin — running into living rooms across the country before some folks at the stadium could get back from the concessions at halftime.

While Pitt’s Quadree Henderson — the people’s champ among ACC statheads — has been far and away the conference’s best kick returner (35.9 yards per return, two touchdowns) there’s more discrepancy as to who is the ACC’s best punt returner.

Alexander is certainly in the mix for that title. He is one of four players in the league to return a punt for six points this season — along with Jesus Wilson, Greg Stroman and Braxton Berrios.

Alexander, who has played in one fewer game (6) than the other three guys who have taken a punt return to the house, also ranks second in the ACC in punt return yards (190) and third in yards per return (13.6). The sophomore defensive back — a former three-star prospect from Charlotte, N.C. — is the only player in the conference to have multiple returns of 50-plus yards.

It should be noted that Alexander didn’t just burst onto the scene as a returner; in 2015, he had five punt returns of 20-plus yards. Alexander, however, is so much more than a contributor on special teams; he’s become a playmaking defender, too. He was recruited to the school by defensive coordinator Todd Grantham.

Louisville, as a team, has six interceptions (one per game) this season, and Alexander has half of those (3), which is tied for the second-most in the ACC ( Florida State’s Tarvarus McFadden leads with five). In the Cardinals’ other colossal game this season, which they lost in thrilling fashion at Clemson, Alexander starred once again. Deshaun Watson has attempted 886 passes during his prolific three-year career as a Tiger. In total, he’s only thrown 23 interceptions. Alexander’s performance against Clemson accounted for two of those (8.7 percent).

Watson has been arguably the best player in college football since 2014. However, Louisville has given him more trouble than almost any other opponent, especially in the ACC. The Cardinals have intercepted Watson nine times — by far the most of any other program. Four other ACC teams have picked him off a total of two times, each: Georgia Tech, Wake Forest, Boston College and North Carolina.

Alexander is the only player to intercept Watson more than one time.

Alexander’s other interception this season came against Syracuse’s Eric Dungey, which gives him four for his career. He recorded one interception (against Samford) while playing in 12 games as a freshman.

The Louisville defensive back has broken up three passes, which along with his three interceptions gives him six passes defended on the season — tied for ninth most in the ACC.

By some metrics, the Cardinals, who are still in contention for a berth in the College Football Playoff, have a top-15 passing defense. Obviously, a lot of elements factor into that, but Alexander breaking out as a ballhawk in the secondary is certainly a primary cause for this development.

Stay tuned and don’t blink; with Alexander on the field, lightning can strike quickly.