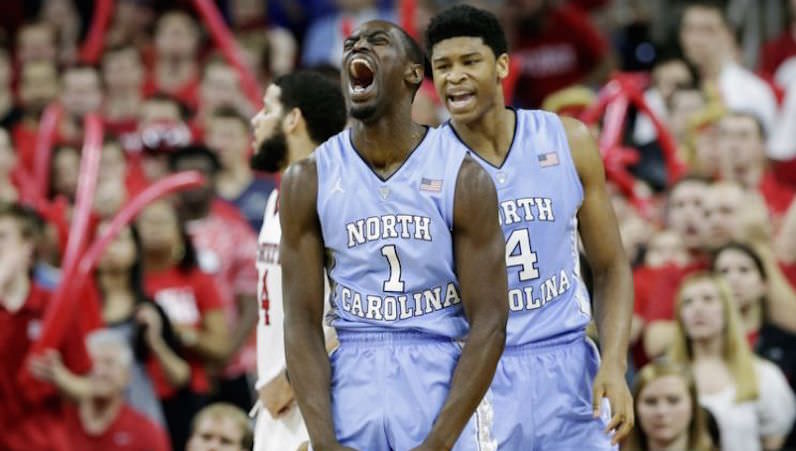 Hey, did you know that there is a somewhat important basketball game Thursday night?

Well, there is. North Carolina will travel eight miles to Durham for another chapter with Duke. Both teams are outstanding, and the game should be wildly entertaining.

One of the major storylines heading into the meeting is the health status of North Carolina junior swingman Theo Pinson.

Pinson missed the first half of the season after fracturing the fifth metatarsal in his right foot last October. He returned in time to play 13 potent minutes in the blowout over NC State. Like clockwork, UNC won six straight games with Pinson back in the rotation. Lightning struck again, though, when Pinson injured his right ankle in the win over Virginia Tech.

Shareholders on the lighter blue side of the rivalry are hopeful that Pinson will return to action against the Blue Devils on Thursday. The concern is obvious: Duke has the best collection of offensive perimeter players in the nation, and Pinson is UNC’s best wing defender. To stop one, you likely need the other.

The Tar Heels can still win without Pinson, but his defense is vital. In the team’s three most recent games — all of which Pinson missed — the Tar Heels allowed 1.1 points per possession or more, according to KenPom.com.

The 6-6 junior is a long-limbed defender who can switch across multiple positions. He’s capable of checking point guards and some stretchier power forwards. Duke frequently spreads the floor with four perimeter shooters. It is rare that the Devils play with two traditional bigs, like Amile Jefferson and Harry Giles. Mike Krzyzewski normally deploys Jayson Tatum or Luke Kennard as the team’s nominal 4.

According to Synergy Sports, the Blue Devils rank No. 16 in the nation in offensive efficiency on spot-up possessions. Duke scores 1.1 points per possession — while shooting 44.4 percent from the field — on spot-ups. The Blue Devils turn the ball over just 9.1 percent of the time on such possessions.

Pinson also ranks second on North Carolina’s roster in steal rate, per Sports-Reference. When Pinson is on the floor, nearly four percent of opponent possessions end with the junior stealing the ball, which can open up things for a North Carolina offense that shoots 52 percent in transition, according to Synergy.

It remains uncertain whether or not Pinson will play Thursday evening, but if North Carolina is to have its best chance of grabbing a victory against Duke, then the Tar Heels need the best defender on the roster in action.