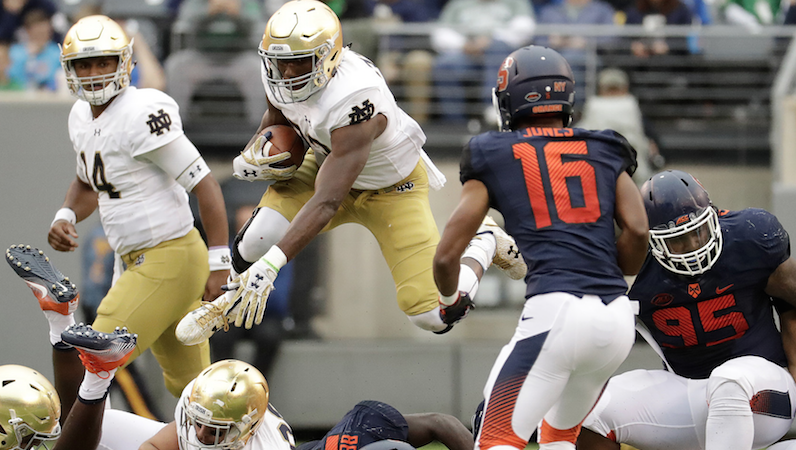 This fall, Notre Dame will try to rebound from one of its worst seasons in program history.

For just the fifth time since 1899, the Fighting Irish finished with fewer than five wins last season. It is worth noting, though, that all but one of Notre Dame’s eight losses came by eight or fewer points. The team’s only blowout defeat came at the hands of USC — a late-season buzzsaw.

This was not all bad luck, though; Notre Dame had plenty of deficiencies. This offseason, Brian Kelly brought in two new coordinators, including Mike Elko from Wake Forest to head up the defense. Mike Long arrives from Memphis to call shots for the offense, and Long will have the advantage of coaching an impact player from Day 1.

Running back Josh Adams, now a junior, is still in South Bend, and he will be the origin point for Notre Dame on offense. The importance of Adams rose even more after Tarean Folston decided to enter the 2017 NFL Draft.

Adams racked up 1,126 yards on 179 total touches in 2016, which was tops on the team. He saved his best performance for the end of the season, too. In the loss at USC, Adams scampered for a career-high 180 yards and also hauled in two of his three targets for an additional 30 yards receiving.

Trust is key when it comes to Adams. In his first two seasons of college ball, the running back has fumbled just three times on 274 carries. As a sophomore, Adams averaged 5.7 Highlight Yards per Opportunity — a good number for a high-volume back. For comparison, North Carolina’s Elijah Hood and T.J. Logan averaged 6.6 and 5.1 Highlight Yards per Opportunity, respectively, last season.

Highlight Yards per Opportunity essentially measures how many yards a back averaged after the offensive line did its job blocking at the line of scrimmage.

In 2016, Notre Dame’s pass-heavy offense centered around DeShone Kizer slinging the ball all over the field. Adams was in the mix here, too: 21 receptions on 31 targets, according to Football Study Hall. As a receiver out of the backfield, Adams snagged two-thirds on the passes thrown his way.

The Long Road Ahead

Long brings an uptempo scheme to South Bend that will emphasize pace and efficiency in the running game. That is not exactly groundbreaking — what coach does not want to play faster and more effectively? However, Adams has a serious opportunity to produce monster numbers under Long. Last season at Memphis, the Tigers’ three leading ball-carriers all averaged better than five yards per carry and six Highlight Yards per Opportunity, per Football Study Hall.

Replacing Kizer at quarterback will be a challenge, and Notre Dame has another daunting schedule on the horizon. Notre Dame will host the likes of Temple, Georgia, USC, NC State and Navy in 2017. The team will have to travel for road dates with Michigan State, North Carolina, Miami and Stanford.

Get ready to see plenty of Adams in 2017. For the Irish to have any shot of establishing a run game and grabbing more wins, they will need the junior back more than ever before.