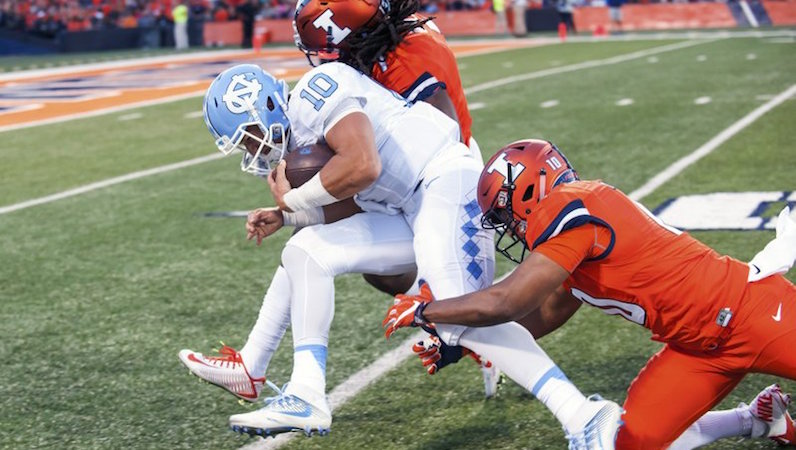 The 2017 NFL Draft is right around the corner with the first round set to launch on April 27. One of the names certain to be called that night is North Carolina quarterback Mitchell Trubisky.

Trubisky started just 13 games at North Carolina, but in a smaller sample, he put together a résumé that will have him donning a baseball cap with the logo of an NFL franchise on the front of it next Thursday.

Everyone knows the basic passing metrics we use to evaluate quarterback prospects: yards, touchdowns and interceptions.  Here we take a look at how Trubisky’s advanced numbers have helped his case to become the draft’s top quarterback.

Trubisky has been stacked up against other top quarterback prospects from 2017 as well as the three signal-callers who were selected in the 2016 first round: Jared Goff, Carson Wentz and Paxton Lynch.

ESPN Analytics created a holistic statistic to measure overall quarterback efficiency: Total Quarterback Rating (QBR). This metric takes into account a variety of factors and adjusts for the strength of the opponent.

[Note: Wentz played in just seven games in 2015 due to an injury. Also, ESPN Analytics does not track FCS stats.]

It is probably no real surprise that three of these top quarterback prospects rank inside the top 10 nationally in total QBR.

Ah, yes, the ever-important passing-specific metrics! Watson, Trubisky and Mahomes were all incredibly accurate as well. Spread offenses can help boost these numbers, but completing better than two-thirds of your passes, like Trubisky and Watson, is darn good.

Here is one of the stats that demonstrates why Goff was so highly thought of despite never taking a snap under center while in college. In Sonny Dykes’ new-wave air raid offense, Goff averaged over eight yards per attempt — the only player in this limited pool to do so.

Trubisky put up the second-best yards-per-attempt number here; however, we are splitting hairs. Mahomes, Watson and Trubisky are in the same neighborhood, and Kizer is just one block over. Kizer also recorded the highest sack rate — 6.5 percent.

One of the themes with this year’s group of high-end quarterback prospects is their ability to run. All four of these guys put up impressive numbers on the ground, which differentiates from 2016’s first-round picks.

One of the statistics to look at here is Highlight Yards per Opportunity, which comes courtesy of Football Study Hall.

This is an area where Trubisky stands out a little bit. Watson ran for nearly 300 more yards in two more games, but Trubisky ran for a full yard more when afforded the opportunity. Kizer stacked up nicely here, too.

All four of these prospects have mobility and can throw on the run, but clearly they also have the ability to make plays for themselves. Some words of advice, though: learn how to slide.

What does this mean for UNC?

Well, obviously the Tar Heels lose a really talented player. It will be more of a challenge to score in 2017 — no duh. Football programs try to sell recruits on the ability to churn out NFL players. Trubisky’s meteoric rise — from backup to potential No. 1 pick in less than a year — can be a pitch for Larry Fedora and his staff.

Trubisky proved that Fedora’s spread system can produce an NFL player, and it can do so very quickly. The player may have to wait his time on the bench early in his career, but when featured, quarterbacks shine in this offense.

This is a wildly inexact science; even the experts struggle with these decisions — just look at how Year 1 went for Jared Goff. This just peels a few more layers back to display why Mitchell Trubisky is valued so highly among professional ball clubs.