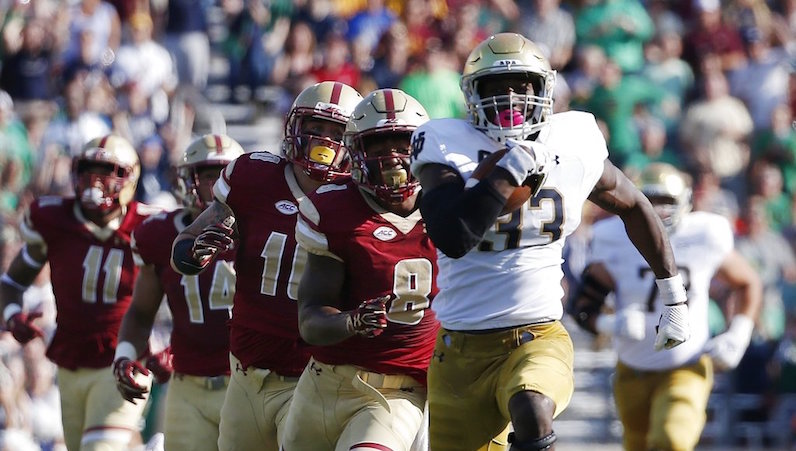 Notre Dame's Josh Adams (33) breaks away from Boston College's Will Harris (8) during the first half of an NCAA college football game in Boston. (AP Photo/Michael Dwyer)

Bryce Love and Saquon Barkley are the two running backs running off the field and up to the Heisman Trophy ceremony. However, Notre Dame has an incredibly good back, too; whether or not Josh Adams is flying under the radar, it’s time to start paying more attention.

NC State and its monster defensive line better be ready for Adams.

I and Love and You

According to Sports Reference, there are currently only three FBS players this season with at least 50 carries, averaging nine or more yards per carry, and five rushing touchdowns. Josh Adams is one of these players; the other two are Bryce Love of Stanford and Damien Harris of Alabama.

No other Notre Dame back in the last 20 years has done what Adams has so far in 2017.

Adams currently ranks 10th nationally in rushing yards with 776; he’s one of only six FBS players that averages more than nine yards per carry.

The numbers beyond the numbers

The offensive line of Notre Dame has done well blocking for Adams, but the junior ball-carrier has carved out chunks of yards on his own, too. Adams has an Opportunity Rate of 38.4 percent, per Football Study Hall. This means the offensive line has created five yards of running room for Adams on 38.4 percent of his carries.

When Adams does get to the next level, though: look out. Adams, who has 10 carries of 20-plus yards, averages 14.7 Highlight Yards per Opportunity, according to Football Study Hall. Translation: on carries when the offensive line does its job, Adams averages nearly 15 additional yards per touch.

That number is right there with Love, who averages 15.2 Highlight Yards per Opportunity; Barkley checks in at 7.6.

Notre Dame’s offense ranks No. 1 nationally in rushing S&P-plus and No. 2 in Isolated Points per run play (1.41).

NC State’s defense is far from a joke

As great as Josh Adams has been, his game log isn’t spotless. Adams had issues taking off against Notre Dame’s two toughest foes: Georgia and Michigan State.

Against the Bulldogs and Spartans, Adams combined for 109 yards on the ground, on 28 carries — 3.9 yards per carry. Adams scored zero touchdowns in those games, too.

Does NC State have the ability to contain Adams, too?

The Wolfpack have a ferocious front seven, led by defensive end Bradley Chubb. NC State has yet to allow a 100-yard runner so far this season; Lamar Jackson was the closest a few weeks ago — 19 carries, 73 yards and two touchdowns.

That bodes well, although the advanced numbers don’t favor the Pack quite as much. NC State’s defense ranks 14th nationally in opponent Opportunity Rate (31.6 percent), which is solid. But that back rank a little lower in terms of Success Rate — 38.6 percent, No. 45 in the FBS — and 25th Isolated Points per run play (0.79).