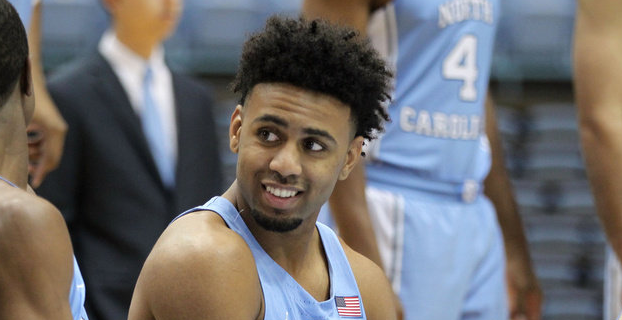 Expectations were through the roof for Joel Berry heading into his junior season. Through the first four games, however, he’s been better than even the most bullish projections. Berry’s advanced numbers — usage rate (22 percent), assist rate (27.1 percent), win share per 40 minutes (.34) — have all jumped across the board. It’s early, but he’s in the midst of a very impressive start to the season shooting the basketball.

The junior, who’s averaging 16.5 points per game, has attempted 18 shots from inside the arc, and connected on 11 of those launches (61.1 percent), which is a serious boon for his efficiency. He’s shooting more 3-pointers this season; over half of his field goal attempts have come from outside the arc (52.6 percent). Berry has an offensive rating of 142 points per 100 possessions, according to Ken Pomeroy. He’s the best player on the nation’s third-most efficient offense: 117.8 points per 100 possessions.

It should inspire even more confidence amongst UNC fans that Berry’s getting to the line at an improved rate this season, too. Berry’s attempting .58 free throws per field goal attempts; this is an increase of roughly 31 percent over last year (.265). According Pomeroy, Berry draws 6.1 fouls per 40 minutes, and he’s attempting nearly 11 free throw attempts per 100 possessions. North Carolina’s offense is built to highlight strong point guard play; the ball is going to be in Berry’s hands. It will be an incredible asset in close games to have a ball-dominant guard who essentially makes nine out of 10 free throws. That’s how you shorten games.

UNC has played an easy schedule to start off, and that will continue Monday against Chaminade; however, things will pick up right after that. The Tar Heels will almost certainly play the winner of Oklahoma State and UConn Tuesday evening — both of whom are inside KenPom’s top 70.

No matter what happens in Maui, though, Berry has emerged as the best point guard not only in the ACC — but arguably the nation. He’s not Steph Curry (newsflash: no one is!), and it will remain to be seen if this shooting clip can continue, but there’s no doubt that Berry — a blend of high-volume usage and efficiency — is one of the best players in America.