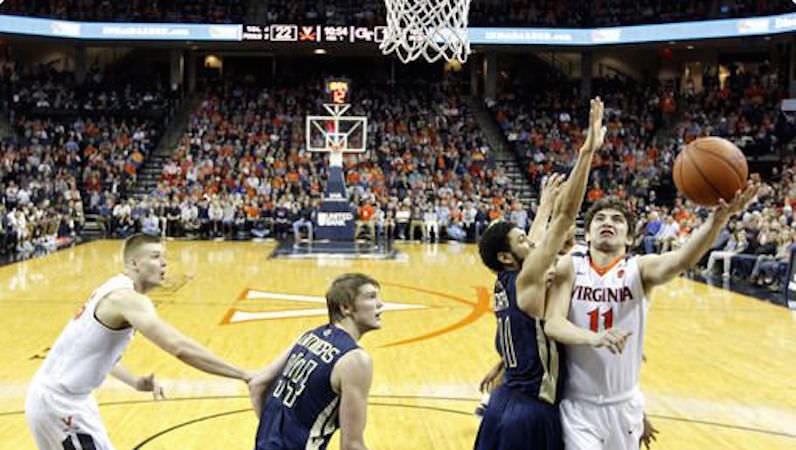 Ty Jerome is working his way into a bigger part of Virginia's rotation. (AP Photo).

If you caught any of Virginia’s heartbreaking loss on Sunday to then-No. 1 Villanova, certainly you took notice of UVA playmaker Ty Jerome.

The Cavaliers and Wildcats took turns landing body blows in the final minutes of the game — until, of course, Donte DiVincenzo’s game-winning tip-in at the buzzer. Jerome, only a freshman, was on the court in a variety of high-leverage situations, and he delivered.

The loss to Nova marked both a career high in minutes (24) and points (15) for Jerome, who connected on six of nine field-goal attempts. While Virginia fell short, Jerome scored six of the team’s final eight points during the last four minutes of the game. It should inspire a lot of confidence amongst Wahoo fans.

Jerome plays around 10 minutes per game and uses just 18.3 percent of Virginia’s possessions, according to KenPom.com, when he is on the floor. Despite a smaller sample of plays, the framework of an outstanding offensive wing is out in the open. Per Synergy Sports, Jerome leads the ACC in field-goal percentage coming off screens: 72.7 percent. Austin Arians of Wake Forest is the only player in the conference shooting at least 60 percent off screens this season (minimum of 10 possessions). Jerome has scored 1.21 points per possession on these actions, which ranks seventh in the ACC, according to Synergy.

The rookie’s playing time is on the incline, too. Over Virginia’s last four games, Jerome has played nearly 17 minutes per game, while shooting 62.3 percent from the field. Jerome has made five of 10 threes against Boston College, Georgia Tech, Notre Dame and Villanova.

Virginia is one of the best catch-and-shoot teams in the nation; the Cavaliers have connected on 41.8 percent of catch-and-shoot opportunities, which ranks second in the ACC. Jerome fits in nicely here. The freshman has made 11 of 21 (52.4 percent) catch-and-shoots this season.

Jerome is not a one-dimensional artist on offense, though. He has a nifty off-the-bounce game, too.

Watch him do super mean things to DiVincenzo with 15 seconds remaining against Villanova. Look at this crossover! I will stop short of some insane Kemba Walker comparison here, but that is just filthy.

The move isn’t empty, either. It produces results. According to Synergy, 13 percent of Jerome’s shots in the half court have been runners, and on those possessions, Jerome shoots 80 percent.

Kyle Guy joins Jerome as a dynamic backcourt pairing for Virginia’s bright future. Both players are freshmen and will gather valuable experience this season playing for Tony Bennett. The Cavaliers, however, have a ton to play for right now. This is a crew — led by its defense — that can make a Final Four run, and the rookies can help.

Starting Wednesday night, keep an eye Virginia, and the expanding games of Jerome and Guy when UVA hosts Virginia Tech.