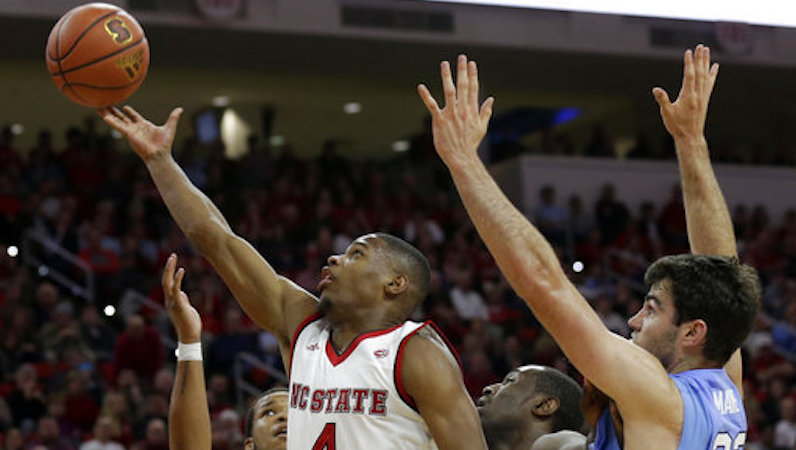 North Carolina State's Dennis Smith Jr. (4) shoots against North Carolina during the the first half of an NCAA college basketball game in Raleigh, N.C. Smith, the Atlantic Coast Conference freshman of the year, is headed to the NBA after one season with the Wolfpack. (AP Photo)

To the surprise of few, Dennis Smith Jr. declared for the 2017 NBA Draft earlier this week. He is one of four hyper-talented point guard prospects in this year’s draft and is a lock to be a top-10 pick.

With the departure of DSJ, here is what NC State will have to replace next season, no matter who is on the roster.

Smith was one of the best players in the ACC at creating contact. According to KenPom, Smith drew 5.6 fouls per 40 minutes in league play. That ranked as the fifth-highest total in the conference. Despite playing in only 32 games, DSJ attempted 200 free throws — also the fifth-highest number in the mighty ACC.

In conference games, NC State attempted just 321 free throws; only three teams toed the line less than the Wolfpack. Smith, however, accounted for 117 — or 36.4 percent — of those attempts.

The foul line is an excellent location to rack up points with ease, and sans Smith, another ball-handler will have to find ways to get to the charity stripe.

It has been discussed plenty in this space before, but Smith knew how to run a pick-and-roll, and run it well. As a ball-handler, Smith scored 126 points this season shooting out of that type of action, which ranks fourth-most in the ACC, according to Synergy Sports.

Of ACC players to run at least 60 pick-and-rolls, Smith ranked 14th in field-goal percentage: 42.1 percent. That is better than other PNR maestros Donovan Mitchell and Matt Farrell. In total, he scored at least one point on nearly 38 percent of those possessions.

Smith found a decent groove as a passer in this action, too. Per Synergy, NC State scored one point per possession and shot nearly 46 percent from the field when Smith pass out of a pick-and-roll. Smith recorded 197 assists this season, and 73 of those came from pick-and-rolls.

According to KenPom, DSJ ranks No. 24 nationally in assist rate; the freshman assisted on 32.4 percent of his team’s made baskets while on the court.

As good as he is in this action, which will serve him very well in the NBA, DSJ was turnover prone. According to Synergy: Smith turned the ball over on 17 percent of his pick-and-roll possessions. There were 46 players in the ACC that ran at least 60 pick-and-rolls this season; Smith’s turnover percentage ranks eighth-highest of that group.

The best offenses in basketball — regardless of level — are those that put good players in a position to succeed through a combination of spacing, passing, cutting and shooting. Take some time to watch the San Antonio Spurs or the Golden State Warriors in the playoffs; the ball flies around the perimeter, rarely being held for longer than two seconds as the team looks for the perfect shot. Invariably, those teams find that player.

However, basketball is not that simple. If every team could generate offense that way, they would do it. Mark Gottfried’s UCLA high-post scheme had some great moments in Raleigh, but it lacked any real synergy or connection this season. When that happens, two easy ways to drum up offense are pick-and-roll action and getting to the foul line.

Kevin Keatts brings a new offense to town, and that is exciting. But the Wolfpack will have big shoes to fill at the top of its offense.