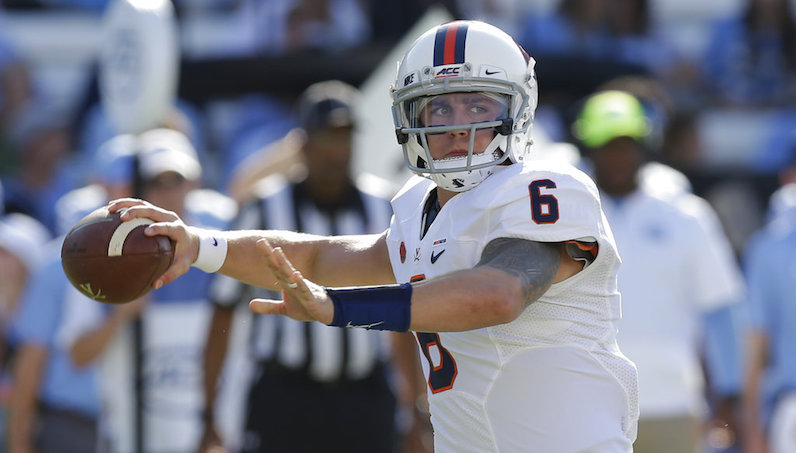 They aren’t necessarily the sweetest three words in the English language, at these days at Virginia “Also Receiving Votes” has a pretty nice ring to it.

The Cavaliers have not spent a lot of time ranked in the Top 25 the past nine years. Virginia cracked the AP Poll at No. 24 for Thanksgiving week in 2011, quickly dropped out with a 38-0 loss to Virginia Tech and didn’t really sniffed a ranking again until this season, which is off to a 5-1 start.

That could change if this weekend follows last week’s pattern with a UVA victory and losses by several ranked teams. The Cavaliers got votes in both the Coaches’ and AP polls this week, coming in 28th and 29th respectively.

But how much does it matter? Voters deciding the Cavaliers are one of the 25 best teams doesn’t necessarily change anything about the games themselves and certainly doesn’t make a difference in the team’s approach.

Listening to head coach Bronco Mendenhall and seniors Kurt Benkert and Micah Kizer talk earlier in the week, one gets the distinct impression that qualifying for a bowl game with a victory against Boston College is much more prevalent on their minds, though both pale in comparison to longer term goals.

Yet, being ranked in the Top 25 does mean something, doesn’t it? For the fans, it certainly does. The Cavaliers diehards have toiled as rivals such as Virginia Tech and North Carolina have spent plenty of time ranked in recent years, and UVA fans even take the occasional ribbing from James Madison fans in the area whose Dukes won an FCS national championship.

Beyond bragging rights, there are practical advantages. Top 25 teams get more exposure and that’s a benefit in recruiting, fundraising and other areas. When you’re ranked, your scores come across the tickers more often, your games are previewed on College GameDay and discussed on national radio programs.

No, there won’t be any immediate noticeable changes in the Virginia football complex next week whether the Cavs are No. 26, No. 25 or not even receiving votes. But you better believe folks in and around Charlottesville have been much more eager to see Sunday’s announcement of the new polls each of the past two weeks.

Of course, it could all become moot if the Cavaliers can’t take care of Boston College and the Eagles present a different kind of challenge coming off an upset at Louisville. Virginia’s secondary has shut down passing games from Duke and UNC the past two games, and the Cavs have the nation’s top red zone defense. But Boston College running back AJ Dillon had three rushing touchdowns inside the 20 against the Cardinals.

UVA is on the verge of greater national recognition, but the Cavaliers will have to earn it.

J’Raan Brooks, a recent USC decommit, will now be a UVA target