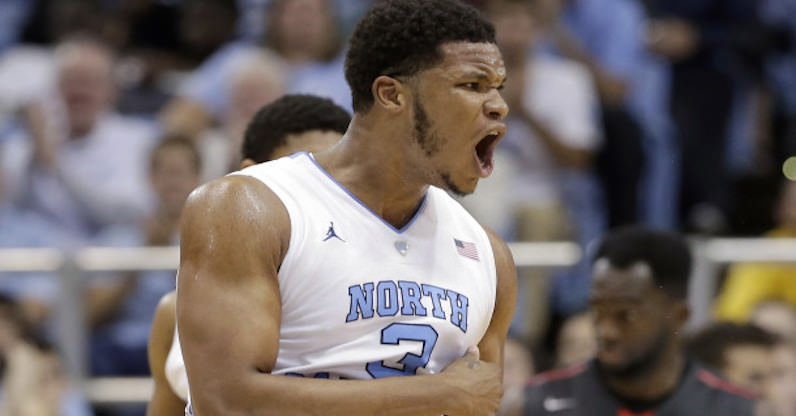 After an inexplicable loss to Georgia Tech in Atlanta at the onset of conference play, North Carolina has ripped off three consecutive ACC wins. The Tar Heels have done that behind a top-10 offense that continues to flex its muscles on the offensive glass.

The main provocateur in this department is senior big man Kennedy Meeks.

Meeks’ shooting is a little down from previous seasons, but he’s still at a healthy 51.1 percent clip. If you’re a generous grader, he’s averaging a double-double: 12.7 points and 9.7 rebounds — both of which are career highs. Those two basic counting stats aren’t the only two areas of the game where Meeks has reached newfound territory: 27.0 player efficiency rating (PER), 0.244 win shares per 40 minutes and 24.6 percent usage rate.

It’s no secret that North Carolina crashes the boards better than just about any team in America. The Heels have an offensive rebounding rate of 42.1 percent, which is third-best in Division I. Isaiah Hicks and Luke Maye can clean the glass, but Meeks and Tony Bradley have paved the way.

Meeks ranks ninth nationally in offensive rebounding rate, according to KenPom.com — 17 percent — and his 70 offensive rebounds are only 10 fewer than he had all of last season (in 33 games). The senior power forward leads the ACC in both offensive and total rebounds.

Not only has Meeks cut his turnovers down (10.3 percent turnover rate), but the Charlotte native has upped his assist game, too. He’s averaging 2.7 dimes per 100 possessions, and his post passes have been highly effective. According to Synergy Sports, when Meeks passes the ball out of a post-up, after the defense commits, UNC scores 1.35 points per possession (on 50 percent shooting). That ranks fourth-best in the ACC — behind only Tyler Lydon, Konstantinos Mitoglou and Jaron Blossogame.

The big fella has a few different ways in which he likes to score the ball. Meeks has shot 46.8 percent out of post-ups this season, per Synergy. He has also done well as a cutter: 1.18 points per possession (No. 27 in the ACC) on 55.6 percent shooting.

North Carolina’s coaching staff must be pleased to see Meeks’ gains on the defensive end, too. He will never be much of a shot-blocker, but opponents are shooting less than 36 percent against him out of post-ups. Plus, the Tar Heels, with Meeks playing a career-best 23.8 minutes per game, have never been stingier on that end of the floor during his time in Carolina blue. UNC is allowing just 92.9 points per 100 possessions, which is the best number the Heels have put up since the 2011-12 season.

North Carolina, at 3-0 in conference play, is set up for a showdown with Florida State this Saturday in Chapel Hill. The Seminoles are 4-0 and tied for top-dog status with Notre Dame in the ACC.

It’s only January, but games like this could play a major role in determining seeding for Brooklyn. UNC will be without Tony Bradley (concussion) this weekend; Roy Williams needs Meeks to once again control the glass against FSU, the second-tallest team in college basketball.