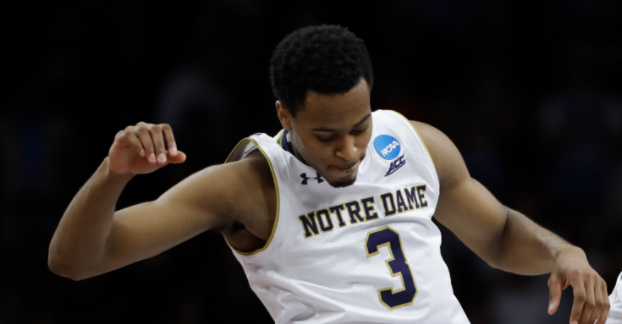 Three former Notre Dame basketball players have been selected in the last two NBA Drafts: Jerian Grant and Pat Connaughton in 2015, then Demetrius Jackson in 2016. If the Fighting Irish are going to keep this trend going for a third straight season, the responsibility will likely fall on the shoulders of one of the ACC’s most experienced players — senior forward V.J. Beachem.

Beachem ended last season hot; in six postseason games, he averaged 16.7 points and shot 54.3 percent on three-pointers. He splashed 88 threes as a junior, which was the fifth-most in the ACC.

According to Ken Pomeroy, Beachem’s offensive rating of 121.3 ranked No. 93 in the nation. After flirting with the idea of turning pro, the sharp-shooter decided to stick in South Bend for one more season. Now a senior, he is no longer a simple floor spacer for the Irish on offense; he will be the focal point of Mike Brey’s spread attack.

Of all returning ACC players, Beachem’s 88 three-pointers from a season ago trailed only Grayson Allen of Duke.

Notre Dame has finished in the top 20 nationally the last two seasons in terms of turnover percentage; this is one of the ways the Irish maintain a high offensive efficiency. Following the win over Bryant, they rank No. 1 in the nation in turnover rate (4.3 percent).

Beachem attempted seven free throws against the Bulldogs, which is a positive sign for supporters of the Irish. He played over 1,110 minutes last season but attempted just 47 free throws. When opponents run Beachem off of the arc, he can be explosive attacking the basket.

Notre Dame’s star forward is an intriguing pro prospect because of his length and shooting range. NBA teams crave players who can stretch defenses and check multiple players on the other end of the floor. Beachem, who stands 6-8, has made 131 of the last 301 threes (43.5 percent) he’s attempted at Notre Dame. If you can shoot, you can earn a roster spot in the league; however, if you can fill it from distance and defend, you can earn yourself a lot of money as a 3-and-D player.

Beachem is currently projected as a top-40 prospect for next June’s draft; one source even has him as a super late-first-round pick, which is where all of the guaranteed cash is. Beachem is one solid senior season away from setting himself up for a long time to come.