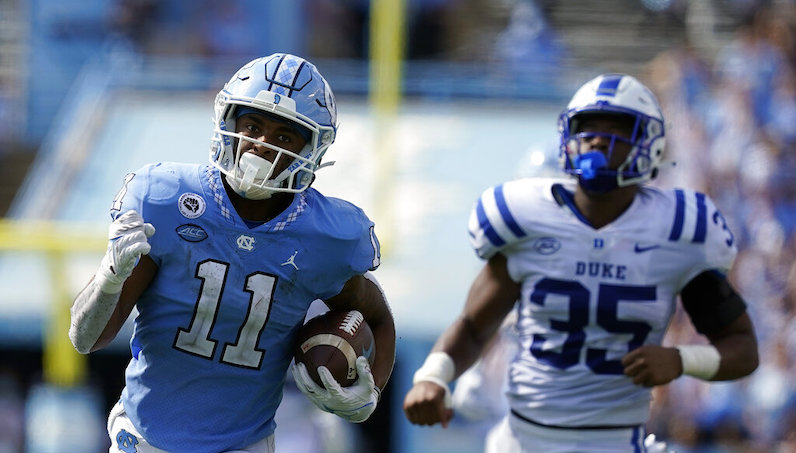 Halloween is only a couple of weeks away and Wake Forest (5-0) is still unbeaten. Is it starting to feel like 2006 in Winston-Salem, again? Too early to say at this point, but if this keeps up for a few more weeks, everyone in the Triad should reserve only the best candy for Dave Clawson and the Demon Deacons when trick-or-treating comes around.

This was a busy weekend in the ACC — with plenty of dramatic finishes. Let’s take a look back!

This week’s ACC Football Power Rankings are out! Make sure to check those out here.

Pickett continues to sizzle and emerge as arguably the top player in the ACC this season. At this point, that’s probably not up for debate. Pickett threw for 304 yards and three touchdowns during the first half of Pitt’s blowout win over Georgia Tech. He finished the game with 389 yards through the air and four touchdowns.

I spoke to Kenny Pickett on the phone after his 389-yard, 4-TD day in a 52-21 win over GT. Of course, I had to ask whether he should be in the Heisman convo. He chuckled. "You guys can figure that one out. I’m just going to keep playing." I am a Heisman voter so …

Downs continues to excel as the go-to guy in North Carolina’s offense. During Saturday’s win over Duke, Downs grabbed eight passes for 168 yards and another touchdown. Downs, who is averaging 15.5 yards per catch, has recorded eight receptions in every game this season, so far, which puts him in rare territory.

Through the first five games of the season, Downs already has 13 receptions of 15+ yards, including nine catches of 25+ yards.

Lining up across from preseason All-ACC wide receiver Jacquarii Roberson, Morin had a monster day against the Louisville Cardinals. He finished with six catches for 122 yards and a touchdown to help the Demon Deacons stay perfect at 5-0.

Morin stepped into a starting role after Donavon Greene sustained a season-ending injury in the offseason.

Led by Kenny Pickett, Pitt leads the FBS in scoring offense (52.4 points per game) and ranks No. 6 in offensive efficiency, according to ESPN.

As David Hale of ESPN points out, this five-game stretch from Pitt is one of the most impressive starts to a season over the last decade of college football.

In the playoff era, the only P5 teams to score more TDs through 5 games than Pitt…

As a result of Pittsburgh‘s 52-21 win at Georgia Tech, the Panthers have scored at least 40 points in all 5 of its games this season. The only other ACC program to accomplish this feat is Florida State, who had 11 straight 40-point games in 2013, seven in 1995 and five in 1999.

Mack Brown is no stranger to the Victory Bell 💪 @UNCFootball pic.twitter.com/sSFCNHmPJo