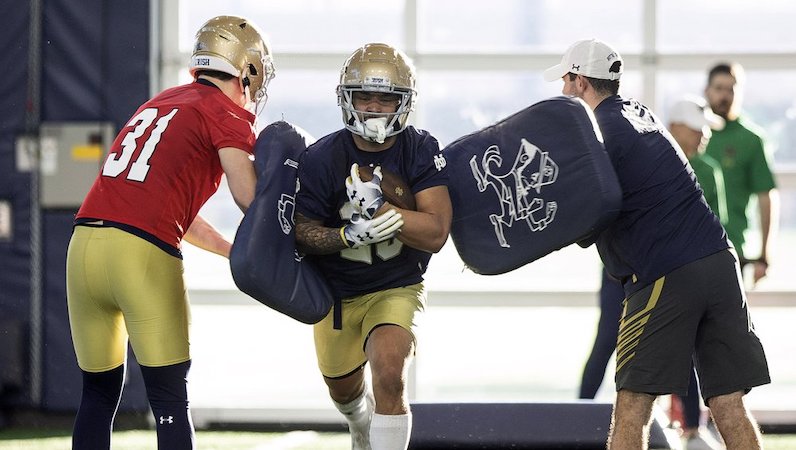 Every week during the 2020 football season we highlight five ACC rookies that put together standout performances. This edition features two sets of teammates and two players — Jordan Addison, Kyren Williams and Myles Murphy — that continue to emerge as special ACC talents.

With quarterback Ian Book in a more pedestrian role — 7.6 yards per attempt, 3 touchdown passes — Kyren Williams has emerged as the tentpole of Notre Dame’s offense. During the first four games of his redshirt freshman season, Williams has three 100-yard rushing performances; this includes 127 yards vs. Louisville last Saturday.

So far, Williams has averaged 121.5 rushing yards per game — good for No. 6 in the FBS. Williams, along with fellow ACC running backs Travis Etienne and Javonte Williams, is one of three FBS players with 400 rushing yards (while average 6+ yards per carry) and 100 receiving yards this season.

This is the second weekly ACC award Kyren Williams has received this year.

Every single week Myles Murphy finds a way to mark spark plays for Clemson’s defense, which ranks No. 2 nationally in efficiency, according to ESPN.

During Clemson’s demolition of hapless Georgia Tech last Saturday Murphy recorded a sack (3.5 sacks this season) and forced the second fumble of his young career. Murphy’s combination of power, size and speed is downright awing.

Similar to Murphy, Pitt’s Jordan Addison seems to get better every week, too. An early standout for the Panthers, Addison had a career day against Miami. While working without Kenny Pickett, Addison hauled in eight passes for 147 yards — both career highs.

Jordan Addison has 15 catches more than any other freshman in the nation.#H2P pic.twitter.com/KCTWm3kh0I

Addison leads the ACC with 38 receptions (6.3 per game) and ranks second with 444 receiving yards.

The Wolfpack have found some contributions from their young defensive backs this season, including redshirt freshman Shyheim Battle and true freshman Devan Boykin.

One week after recording seven tackles and an interception against Virginia, Battle posted five more tackles. Boykin, on the other hand, bagged two tackles and broke up a pass for the second straight week, too.

"In this particular game Isaac Duffy performed really well…Devan Boykin came in and had a pass breakup…Bryson Speas continues to play multiple positions…Dylan McMahon played more than he has this year." — Doeren on the depth guys stepping up

These are major additions for Dave Doeren and NC State, which will be without safety Rakeim Ashford for the remainder of the season.