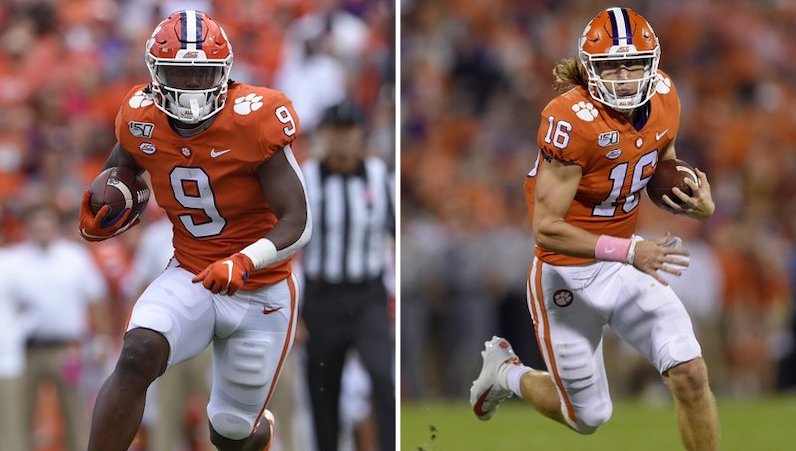 Six ACC teams landed in this week’s AP Top 25, which includes NC State and UNC. The Pack and Heels will face off on Saturday — with both teams ranked — for the first time since Sept. 1993. Clemson, a team that frequently finds itself at or near the top of the AP Poll, looks to ready to run through just about anything in its way. The Tigers are scary good.

Once again, Clemson tops this week’s ACC Football Power Rankings — with a gap between first and second that continues to widen.

The numbers behind Clemson’s historic 73-7 beatdown of Georgia Tech are staggering; following the win, the Tigers now boast a +182 point differential on the season (5 games), including +133 in four ACC contests.

At this moment in time, college football belongs to Trevor Lawrence: 404 yards through the air, 12.6 yards per attempt and five touchdowns at GT.

Clemson saw 17 different players catch a pass in this game, too.

Outside of another 127 rushing yards from Kyren Williams (he’s quite good), Saturday’s win over Louisville was a mostly forgettable game for Notre Dame. Ian Book, who was sacked four times by the Cards, scored the game-winning touchdown late in the third quarter; Notre Dame hung on to win 12-7.

With Kyren Williams' five-yard run in the 4th quarter, Notre Dame marks its fifth-consecutive game with a 100-yard rusher (beginning with the 2019 Camping World Bowl).

The last time the Irish strung together five-straight games with a 100-yard rusher was in 2017.

Notre Dame’s defense didn’t record a turnover or a sack on Saturday, but Louisville’s run game was held mostly in check.

Playing without start tight end Brevin Jordan, King hooked up with Will Mallory, Miami’s No. 2 tight end, for two touchdowns.

The Tar Heels turn the page to NC State — as big home favorites next weekend.

Some brutal drops for UNC, but Florida State will hang on to win. Huge for Mike Norvell and his team.

Welcome to the show, Hendon Hooker. In his first start of the 2020 season, Hooker ran for a career-high 164 yards and three touchdowns against Boston College. Hooker completed 73.3 percent of his passes, which included a 29-yard touchdown connection with rising star Khalil Herbert.

Khalil Herbert has 962 all-purpose yards in 4 games this year.

With three straight wins, NC State pulls into next week’s matchup with UNC at 4-1, with a shinny top 25 ranking, too. However, the injury to Devin Leary looms large. Can NC State’s offense continue to generate explosive plays with Bailey Hockman under center?

Some combo of Bailey Hockman and Ben Finley for the next six games https://t.co/R5oFHgdorZ

Powered by a top-20 offense — in terms of efficiency — Wake Forest ranks No. 7 in the ACC and No. 38 nationally in net efficiency margin, according to ESPN. Kenneth Walker III: also good at football.

First Wake Forest RB with three straight 100-yard games since Matt Colburn II did it against Louisville-ND-Syracuse in Oct./Nov. 2017.

For the first time since 2009, Boston College recorded five turnovers in a single game as the Eagles lost to the Virginia Tech Hokies. Yeah, it’s hard to be -5 in turnover margin and win football games.

Phil Jurkovec throws his second INT of the night.

Looking for Hunter Long down the seam, he tries to fit a pass into a tight window. It's deflected and ends up in the hands of Brion Murray.

Pitt’s defense has proven to be solid this season; the Panthers ranks No. 1 nationally in both rushing yards allowed per game (61.5) and yards per carry (1.85). Unfortunately, the status of quarterback Kenny Pickett remains up in the air for next Saturday. A healthy Pickett is a necessity for the Panthers.

Virginia has posted three straight games with a negative turnover differential — all three defeats. The ‘Hoos are pretty good on the defensive side of the ball; however, these disadvantages are hard to overcome. Obviously. Things won’t get any easier on the road against Miami, either.

Going back to the 2014 season, Louisville is 17-1 in games when the Cards hold opponents to 14 or fewer points. The lone loss came on Saturday against Notre Dame, 12-7.

It wasn’t pretty, and the second half was an absolute #DangerZone moment for FSU, but Mike Norvell’s club hung on to get its first league win of the season vs. UNC. Quarterback Jordan Travis made just enough plays: three touchdowns, including two on the ground (107 rushing yards total).

Chase Brice tossed three more interceptions in defeat to NC State; Duke has now lost 22 turnovers on the season, the worst in the FBS. Brice is up to 11 interceptions.

Huge play by Payton Wilson to intercept Chase Brice in the red zone.

Duke finally gets an open weekend to (hopefully) regroup.

Clemson opens as a 45 pt favorite vs Syracuse. Biggest favorite Tigers have been vs ACC team.