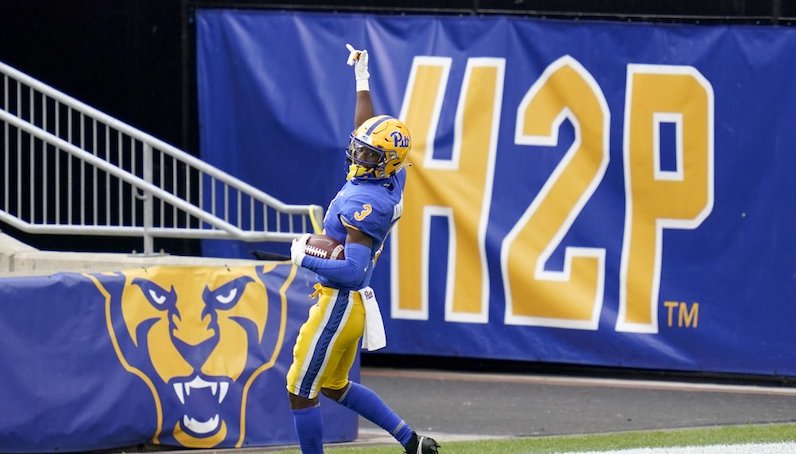 Pittsburgh Panthers wide receiver Jordan Addison (3) celebrates as he goes through the end zone after making a catch against North Carolina State in the first half of an NCAA college football game, Saturday, Oct. 3, 2020, in Pittsburgh. (AP Photo/Keith Srakocic)

Every week during the 2020 football season we will highlight five ACC rookies that put together standout performances.

There are several reoccurring names in this week’s edition of 1st-and-5, led by Jordan Addison of Pittsburgh, plus three first-time honorees.

Through his first four games in a Pitt uniform, Jordan Addison has amassed 23 receptions (No. 2 in the ACC) for 246 yards (No. 3 in the ACC) and three touchdown catches — one in each of the last three games.

The Panthers fell to the Wolfpack on Saturday, but Addison essentially opened the game up with a 75-yard touchdown grab following a blown assignment in NC State’s secondary.

Things started out pretty bleak for Florida State on Saturday against Jacksonville State; however, FSU rallied for its first victory of the season, thanks in part to freshman running back Lawrance Toafili.

Toafili helped guide an FSU rushing attack that ran for 263 yards, the most for the program since running for 305 yards vs. ULM in 2017. (Cam Akers, a freshman at the time, accounted for 117 of those yards.)

Clemson’s win over Virginia marked the first game in Myles Murphy’s young career that he’s failed to record a tackle for loss. Murphy, however, found his way in on a total of six tackles, including two solo sticks. This dude is really, really good.

Through the first week of October, seven ACC players have recorded 15 total tackles and two sacks. Murphy is the only rookie on the list, which includes some of the best front-seven defenders in the conference.

A redshirt freshman from Charlotte, Khafre Brown — one of the first commits after Mack Brown was hired by UNC — saw action in one game during the 2019 season: a home loss vs. Appalachian State.

In a two-game sample this season, though, Brown has had an impact: five receptions for 70 yards and a touchdown. Brown’s first career touchdown opened the scoring in North Carolina’s win over Boston College — an intermediate crossing pattern, with a great toss from Sam Howell.

The Tar Heels have a lot weapons on offense — most of which are known quantities. By this point, everyone recognizes the mix: Howell, Javonte Williams, Michael Carter, Dazz Newsome and Dyami Brown (Khafre’s older brother). That’s plenty of firepower; however, if UNC get contributions from players further down the depth chart, then this offense becomes ever more ferocious.

Devin Leary is throwing the ball to literally everyone today.

Rooks, the top overall prospect in NC State’s 2020 recruiting class, hauled in three passes for 23 yards against the Panthers. Those numbers may seem fairly pedestrian, but Rooks is potentially a key piece in the pass game.

Emeka Emezie, Cary Angeline, Devin Carter and Thayer Thomas will dominant the targets share for the Wolfpack. However, there’s room for Rooks to work in, too.