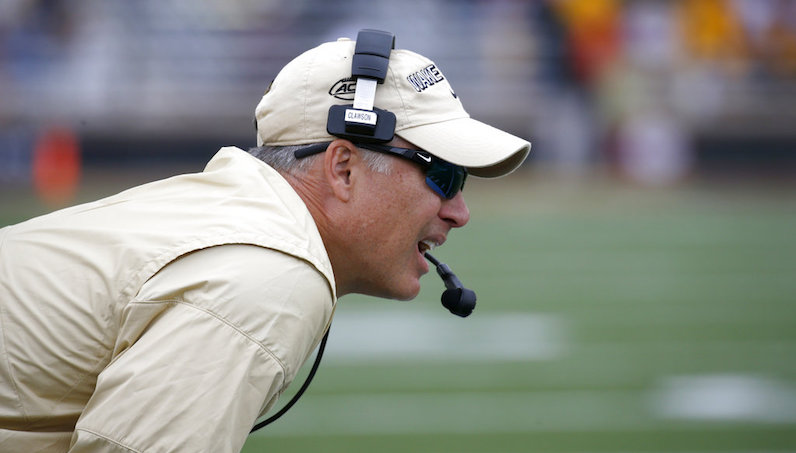 While much of the fall focus has been on the quarterback battle at Wake Forest, another factor that sits just below that decision could have a big impact on the season.

One of the major changes last season — as the Deacons set school records for offense all over the place — was the team’s pace of play. With a senior film junkie in John Wolford at quarterback and talent all over the roster, the Deacons finally let loose and played at an extremely fast pace.

Whether they’ll be able to do that this year under any of the three quarterbacks on the roster is definitely a question mark.

For most of Dave Clawson’s first three seasons, the Deacons played at a more methodical pace. That brought out questions about offensive coordinator Warren Ruggiero, who didn’t seem to be doing much that qualified as interesting or exciting.

But the Deacons also were struggling to find an offensive line, and they had a pretty solid defense. So Clawson ordered Ruggiero to play conservatively, including the pace. Clawson took responsibility for the decision in an interview with the Winston-Salem Journal this spring.

“I forced our offense to play slow the first couple of years because we were so good on defense and we weren’t as good on offense,” Clawson said. “… That was my decision as the head coach, because I thought that gave us the best chance to win. That was not Warren’s decision, that was mine.”

Ruggiero said that for most of his 20 years as a coordinator he had played an up-tempo, no-huddle offense. That came out last year with a strong line and an experienced quarterback who could make quick decisions.

As a team that often is competing against schools with better talent, every small advantage makes a difference. The ability to play quickly — sometimes letting the quarterback make a play call immediately after another play ends — seems small but can turn into something much bigger. The Deacons tired out opponents or caught them off guard repeatedly last season.

Tempo statistics can be impacted by a number of factors, such as how often a team builds a big lead during the season, which might cause them to play more slowly. But using seconds between plays is a pretty good measure, and it’s easy to see how the Deacons have improved.

After being at the bottom of the ACC in Clawson’s first two years, they moved closer to the middle of the pack in 2016. But last season was a huge jump.

Wake Forest barely trailed Syracuse for fewest seconds between plays on average, 21.91 to 21.14. The only other ACC program even below 24 seconds was UNC at 22.92.

While the offensive line returns, Wolford does not. Ruggiero’s most experienced quarterback, Kendall Hinton, is suspended for the first three games of the season. His options are redshirt sophomore Jamie Newman, who threw four passes last year, and true freshman Sam Hartman.

Perhaps it was telling that after the first fall scrimmage, Clawson didn’t comment extensively on anything the quarterbacks did physically. He talked about the mental toll to the Winston-Salem Journal.

“The challenge of playing quarterback in our offense is the ability to do that 60 minutes, 80 to 90 plays and make all of those decisions as quick as you have to make them,” Clawson said. “I think they both did some good things, but I think they both had a little bit of mental fatigue. I don’t know if either of them is ready to do it for 85, 90 snaps.”

If pace plays into the decision on who will start at quarterback, it could favor Hartman, who has been playing in an up-tempo, spread attack in high school, the same system that produced Will Grier, the West Virginia quarterback.

When Newman arrived on campus in 2016, the coaching staff was surprised at how far he was from grasping the college game. Additionally, recent comments by Ruggiero make it seem as though the staff doesn’t believe Newman took advantage of his last several years because he was third string. So despite having three years in the program, he may not have much of a leg up on Hartman in knowing the system.

So will Ruggiero have to slow things down, especially in the early going? We’ll have to wait and see if Wake Forest can hold on to one of the factors that worked in its favor last season.