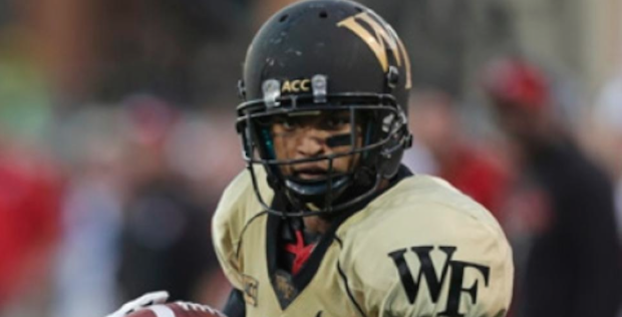 Kevin Johnson could be taken in the first round of the 2015 NFL draft. (AP Photo)

The NFL draft is just hours away, and Kevin Johnson is my favorite story in the first round of this year’s event.

Kevin Johnson of Wake Forest weighed 96 pounds as a high school freshman. He was 5-feet tall and weighed 96 pounds. His mom didn’t want him getting hurt and made him play with boys two years younger than he on his way up the ranks on the gridiron.

Even as a high school senior, he was 155 pounds. He’s from Clarksville, Maryland, but Wake Forest and Wisconsin were two of the few schools to offer him.

You have one enormous school in terms of enrollment, and then you have a tiny school like Wake Forest.

But then another sports headline comes into play. If you know Kevin Johnson’s story, you know that his best friend in the world is former Demon Deacon wide receiver Michael Campanaro. They were neighbors as 10-year-olds.

Johnson and Campanaro are regular guests on The David Glenn Show, and I have never heard them bring up the racial aspect of their friendship. In today’s world, I wish it didn’t matter at all. But as the city of Baltimore, 20 miles from where they grew up, just locked up the doors to a regular-season professional baseball game for the first time in Major League Baseball history due to issues related to race and violent protests, isn’t it fun to celebrate a story like Kevin Johnson’s and Michael Campanaro’s?

Both players were told their entire lifetimes they were too small. Campanaro is a wide receiver who is undersized by NFL standards, and Johnson was 155 pounds when he came into Wake.

Now, Johnson is about 6-0, 190 pounds. He’s a man of incredible integrity and work ethic to get himself to that point. He’s viewed as one of the top three corners in the draft, and he’s going to go in the first round.

And then there’s the lifelong friendship. Michael Campanaro, white guy. Kevin Johnson, black guy. From 10 years old, all the way through now, where their families are great friends.

Johnson’s family is lifelong season-ticket holders to the Baltimore Ravens. With Campanaro now with the Ravens, wouldn’t it be fun if they selected Johnson with the 26th pick of the first round?

Johnson and Campanaro were roommates at Wake Forest. It is my favorite story for football reasons, but also for other reasons.

Isn’t it cool that they have such a unique friendship for a lot of different reasons, on and off the field? It is one that can be celebrated maybe someday without us having to appreciate the black-white nature of the friendship.