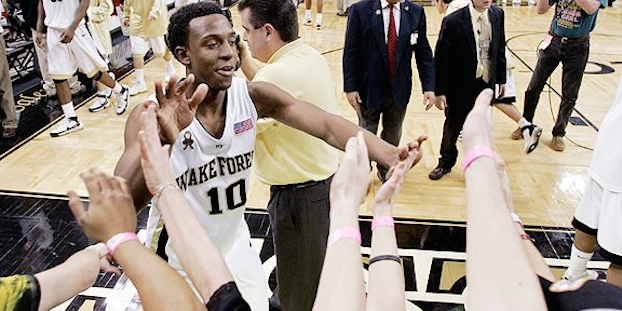 As Wake Forest gears up to hold the second annual Legends Basketball Classic, in which former Demon Deacon players team up to compete against a squad of former players from other NCAA programs, Philadelphia 76ers point guard Ish Smith joined The David Glenn Show on Friday to talk about the alumni game. The event, which will be held on Saturday at the Coliseum Annex in Winston-Salem, will be co-hosted by Smith and 2003 ACC Player of the Year Josh Howard.

Smith, who played for Wake Forest from 2006-10, described the family feel of the alumni game as many former Demon Deacon players are reunited.

“We’re a really, really tight-knit group when it comes to the university,” he said. “They came up with the idea to bring us all back together, and it’s going each and every year.”

When discussing the NBA, Smith pointed to Tim Duncan, Chris Paul, Jeff Teague and others as examples of Wake Forest alumni who have thrived at the next level. He also jumped on the opportunity to take a jab at rival schools Duke and North Carolina.

Other topics of conversation during the interview included Smith’s development in college and lessons learned in the NBA. Click below to hear the full interview: