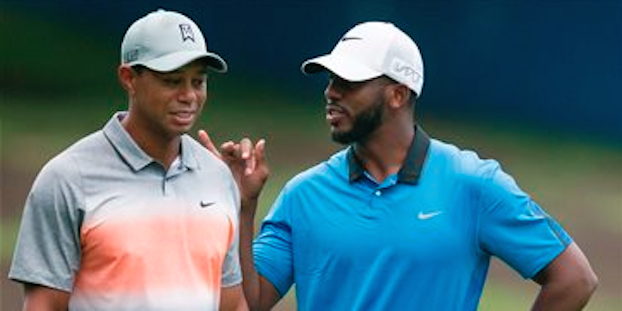 Tiger Woods and Chris Paul were in the same foursome at the Wyndham Championship Pro-Am on Wednesday. (AP Photo)

Former Wake Forest point guard Chris Paul hit the links with Tiger Woods at the Wyndham Championship Pro-Am on Wednesday. McConnell Golf CEO John McConnell was also playing in the foursome and later joined The David Glenn Show to discuss the round.

Recently, reigning NBA Most Valuable Player Stephen Curry played golf with President Barack Obama and stated on Jimmy Kimmel Live that Obama didn’t hold back from talking trash on the course. McConnell said trash talk was present in his foursome, as well.

“I would say Tiger somewhat emulates the president,” McConnell said with a laugh. “He was very pleasant, very professional with me. But CP3 did not have the same courtesy.”

During the conversation, McConnell also talked about Frank Beamer’s golfing ability. Click below to hear the full conversation: