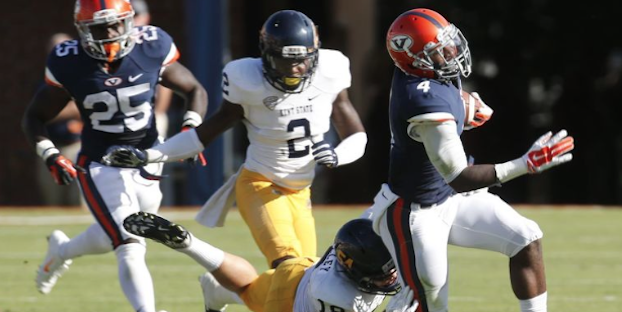 Coming out of the spring, Virginia running backs Taquan Mizzell and Daniel Hamm were listed as co-starters on the team’s depth chart. Now, it looks like a third player will be competing for the No. 1 spot.

Former Maryland running back Albert Reid transferred to UVa in June, and at this year’s ACC Football Kickoff in Pinehurst, North Carolina, Cavalier head coach Mike London indicated that he isn’t planning on keeping the graduate transfer on the sideline.

“We expect him to compete and come in and play,” London said of Reid. “He’s a guy that started games for Maryland. He accomplished a lot of things in his career there.”

In 2013, Reid rushed for 294 yards and two touchdowns for the Terrapins, but his junior campaign the year after was cut short after he suffered a knee injury. He was awarded a medical redshirt and will have two years of eligibility remaining.

Whoever takes over as the team’s top back will have large shoes to fill. Kevin Parks started every game at running back the last two seasons and finished his career fifth in school history in all-time rushing yards and fourth in career rushing touchdowns.

Mizzell saw the most carries in 2014 of any returning player, and he led all ACC running backs in receptions with 39. As a junior, however, he may have more to prove before the coaching staff gives him the nod.

[callout2]“Smoke (Mizzell) has done a better job — he’s done a really good job — of understanding that it’s about north and south,” London said. “We know he can catch the ball coming out of the backfield, but having the ability to just be a complete running back, staying in pass protection on third downs and those things, we’re going to find the best players that can do that.”[/callout2]

The addition of Reid has only pushed Mizzell harder, according to London.

“I think the message was sent,” the head coach stated. “Smoke’s about 190-something pounds now. He ran on our track team. He wants to be the guy, so when you bring a guy in like Albert, he’s made improvements.”

Also in the mix is Hamm, who carried the ball 17 times last fall for 75 yards and a touchdown. Eight of those carries came against Richmond. With Parks and the graduated Khalek Shepherd departed, though, the former walk-on is also looking to contend for the starting job.

“Daniel Hamm has continued to do a good job for us,” London said. “That competition makes us in better position right there.”

Preseason practice will provide opportunities for each of those players to pull away from the others. Until then, the competition for the No. 1 spot will be a three-man race.