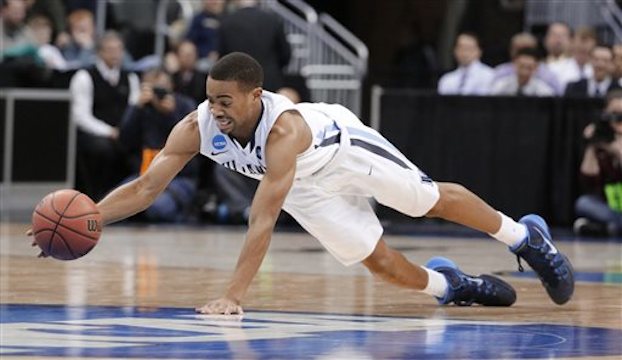 Villanova's Phil Booth dives for a loose ball during the second half of Villanova's NCAA tournament Thursday. (AP Photo)

NC State radio color analyst Tony Haynes joined The David Glenn Show on Friday to talk about the Wolfpack’s Friday win over LSU and preview the team’s round of 32 matchup against No. 1 seed Villanova.

When watching the Wildcats on Thursday, Haynes was impressed by a few of the team’s qualities.

“The thing that really stands out about Villanova is its balance,” Haynes said. “Everybody they put on the floor can score. Many times they’ll have four guys out on the court who can shoot the three, or they can put the ball down on the floor and they can create shots for themselves.”

Haynes said that type of balance makes the Wildcats a difficult team to defend.

“There’s nobody that Villanova’s going to put out there that you can actually play off of,” Haynes stated. “Everybody can score the basketball whether its outside or inside.”