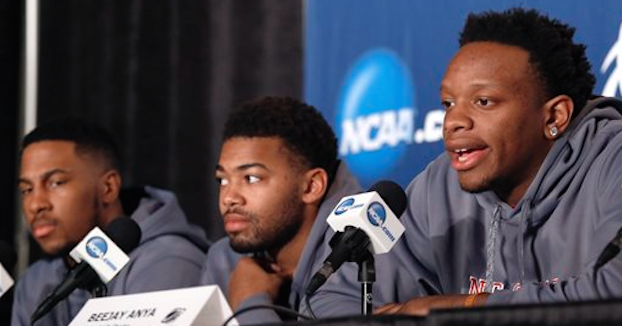 Ralston Turner, Trevor Lacey and Beejay Anya have all been keys to NC State's success this season. (AP Photo)

Dana Jacobson of CBS Sports Network joined The David Glenn Show this week to discuss everything from skydiving to NC State’s first two wins in the NCAA tournament. This year is Jacobson’s first working as a sideline reporter for March Madness.

Many brackets, including Barack Obama’s, were busted after the Wolfpack’s round of 32 win over Villanova. During the interview, Jacobson recalled a prediction made by Syracuse head coach Jim Boeheim before the Orange played NC State earlier in March.

“Jim Boeheim told me at that Syracuse game, ‘This is a Sweet 16, if not a Final Four, team. When they are playing the way they are capable of, that’s where they can go,'” Jacobson said.

When sharing insights from the perspective of a sideline reporter, Jacobson talked about how some of the most memorable moments of March Madness come from the locker room. She also believes there are times when there doesn’t need to be a camera around.

“I want the access, but I do think there’s a point where it has to be cut off so that we can have teams able to regroup in their own way,” Jacobson stated.

Other topics discussed during the conversation included Notre Dame’s win over Butler after Mike Brey’s mother passed away Saturday morning and Jacobson’s thoughts on players and coaches calling out Barack Obama. Click below to hear the full interview: