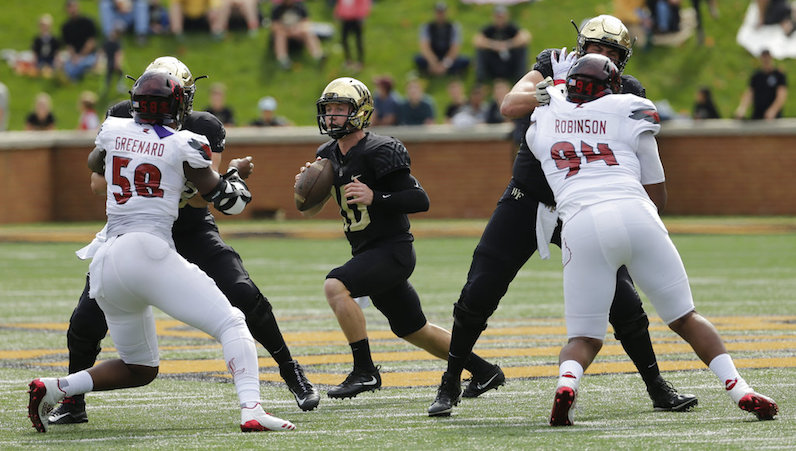 The Atlantic Coast Conference Football Players of the Week have been recognized following their performances in week nine of the 2017 season.

The following are this week’s honorees

Hyatt graded a team-best and season-best 93 percent for 63 plays and had a season-high tying five knockdown blocks in Clemson’s 24-10 win over Georgia Tech. Hyatt did not give up a sack, and the five knockdown blocks tied for the most by a Clemson offensive lineman this year. Hyatt was a big reason Clemson ran 78 plays and had 428 yards of total offense – 221 rushing and 207 passing.

Dortch was voted ACC Receiver of the Week and Rookie of the Week after he caught 10 passes for 167 yards and a school-record four touchdowns in Wake Forest’s 42-32 win over Louisville. Dortch had touchdowns receptions of 32, 4, 25 and 52 yards. His 167 receiving yards marked a career high, and he finished the game with 216 all-purpose yards. Dortch, who suffered a season-ending injury during the game, is one of only three players nationally to have caught four touchdown passes in a game this season. He is the national leader among freshmen in touchdown receptions, receiving yards and receiving yards per game as well as all-purpose yards.

McIntosh tied for the team lead and posted a career mark with 11 total tackles as Miami pushed its winning streak to 12 games with a 24-19 victory at North Carolina. McIntosh, who has started every game on the interior of the defensive line for the past two seasons, added one tackle for loss and one pass-breakup in the win. McIntosh ranks second among players on the defensive line with 28 total tackles this year. He has registered five tackles for loss, and his six passes broken up rank second on the team.

Schwab, a Florida native, led a dominant Boston College defense in its 35-3 win over Florida State last Friday night. Schwab finished with a career-best 12 tackles, including a sack and 2.5 tackles for a loss, and also recorded his second career interception in his 44th career game for the Eagles. Schwab helped Boston College limit the Seminoles to their lowest point total since 2008 and to 213 yards of total offense.

Edmunds recorded eight tackles, a quarterback hurry and an interception in Virginia Tech’s 24-3 win over Duke. Edmunds’ eight tackles were the second-most on the team behind his brother, Tremaine (a starting linebacker). Following Virginia Tech’s first scoring drive of the game, Edmunds intercepted a pass and returned it 15 yards on the first play of Duke’s ensuing possession. Edmunds also contributed on special teams, downing a punt at the Blue Devils’ 2-yard line.

What Wake Forest will miss on offense without Greg Dortch