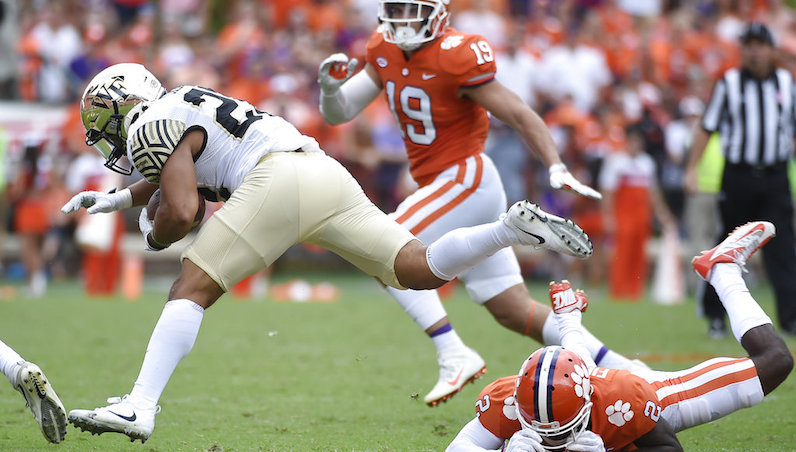 Usually, when a team is getting ready to face Georgia Tech, all the talk is about whether it will be able to slow down the running attack of the Yellow Jackets.

That certainly will be an issue for Wake Forest — no doubt. But the Deacons rank sixth in the ACC in fewest yards per carry, and they’ve had an extra week to prepare for the option.

Perhaps what’s more important, though, is whether the Deacons spent that time to figure out how to get their own running backs going. While Wake Forest’s running game ranks in the middle of the ACC statistically, much of that has come from its quarterbacks.

John Wolford leads the Deacons in rushing, and Kendall Hinton added 92 yards in his lone start against Clemson.

But other than the first and third games of the season (Presbyterian and Utah State), Wake Forest hasn’t been able to generate offense with its running backs. That issue was compounded when Cade Carney went down with an ankle injury, leaving the running to Matt Colburn and Arkeem Byrd.

Here’s how the three backs have fared in the other four games:

Overall, that’s 78 carries for an average of three yards a carry. Certainly nothing to make defenses respect the running backs.

Carney could be back against Georgia Tech, giving the Deacons another tough inside runner. But all three runners will need to find some holes to run through to change their fortunes.

The reason this is important? The Yellow Jackets have allowed teams to create those holes this season.

Georgia Tech has been gashed by some running backs:

The Deacons should be healthy across the offensive line, and they may have Wolford back behind center. Their usual approach has been to use the quarterback either to follow the back through the line or to control the running game in run-pass option situations.

But offensive coordinator Warren Ruggiero may want to find ways to attack Georgia Tech with more traditional running plays. The key to an upset road win just might be beating the Yellow Jackets at their own game: controlling the ball on the ground.