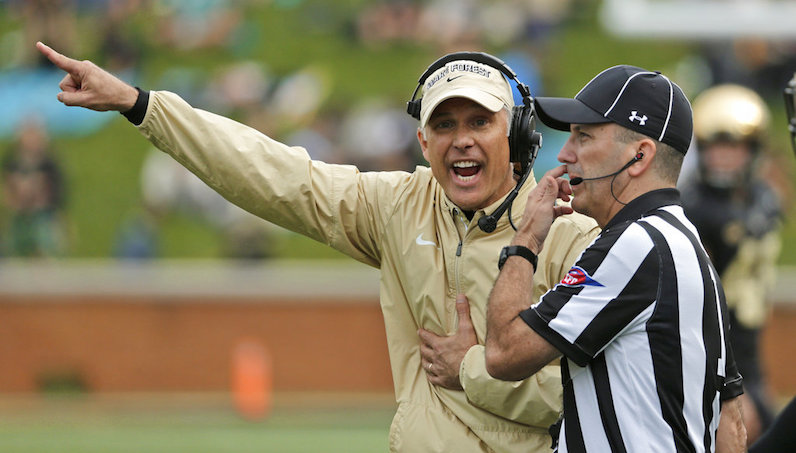 Wake Forest football coach Dave Clawson, left, arguing a call with an official during the second half of an NCAA college football game against Louisville in Winston-Salem, N.C. With an Atlantic Coast Conference title no longer a possibility, No. 25 North Carolina State is refocusing on winning its version of a state championship. The Wolfpack wrap up the regular season with two games against annual instate rivals, starting Saturday night at Wake Forest and concluding next week with a visit from North Carolina. (AP Photo/Chuck Burton, File)

With the ACC football schedules released, it’s time to take a closer look at a few things you should know about Wake Forest’s 2018 slate.

This is the most in school history. Wake Forest will open its season on Thursday at Tulane, then have games on Thursday night against Boston College (home, Sept. 13) and N.C. State (road, Nov. 8). WFU previously played two Thursday games in the 2014 and 2008 seasons, and played a Thursday and a Friday game in the 2015 and 2013 seasons.

The Deacons are used to opening the season on Thursday as they’ve done it eight of the past 10 seasons. Usually it’s against a team it can beat, often an FCS team. However — in what it Dave Clawson hopes isn’t an omen for this year — the Deacons did lose on the road to Louisiana-Monroe in 2014.

This year, the Deacons play on Saturday before each of the mid-season Thursday games, meaning they will have short weeks to prepare. However, that will give them longer run-ups to the Notre Dame and Pitt games that follow the Thursday matchups.

even though this will be its sixth year in the league, it has yet to meet Wake Forest on the football field — ever. Beating the Panthers will be a key to the Deacons’ bowl hopes. Pitt didn’t beat anyone of note last season until it upset then-No. 2 Miami in the season finale. The Panthers don’t graduate many, but they lost some top players to the NFL. Pitt travels to Winston-Salem between games against Virginia Tech and Miami.

For the first matchup, against Florida State, the Deacons also will be coming off their bye. Wake Forest’s next matchup, a road trip to Louisville, will see the Cardinals coming off a bye week.

Clawson gets his open week at the same time as last season: middle of October after six games. Last year, the Deacons lost to Georgia Tech after the bye, but then won three of five to clinch a bowl game.

What does the road to a bowl game look like?

As usual, the Deacons need to do a lot of their work early. After the road opener against Tulane, Wake Forest has five straight home games.

While Tulane only has one winning season since 2002, it was a inch away from bowl eligibility on the final play of last season and shouldn’t be overlooked, especially on the road. But let’s say the Deacons beat Tulane, as well as Towson (week two, FCS school) and Rice (week five, 1-11 last year).

The other early home games are against B.C., Notre Dame and Clemson. The Deacons have only won two of the last five against the Eagles, but let’s say they take this one and lose the other two.

That means the Deacons would be looking for at least two wins, maybe three, down the stretch for bowl eligibility. The payback for five straight home games is that four of the final six are on the road. The obvious places to find wins are the two home games, which are Syracuse and Pitt. Road games against FSU, Louisville (although they’ll be without Lamar Jackson) and N.C. State aren’t as promising.

Leaving it up to the traditional season finale at Duke could be trouble: The Deacons have lost five of the last six against the Blue Devils, and the only win came in the only game not played at the end of the season, 2016’s September matchup.

After Jessie Bates exits for the NFL, what’s next for Wake Forest’s secondary?