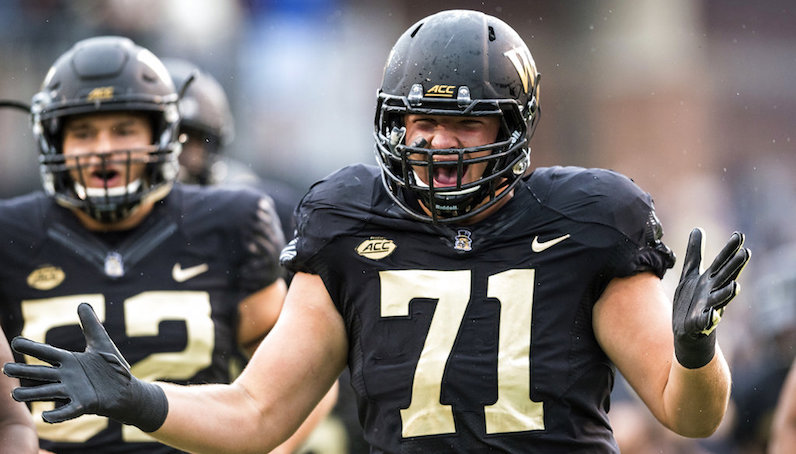 Late Friday night last week, Wake Forest picked up a commitment from 3-star offensive tackle Jaydon Collins (2021). The commitment from Collins proved to be the coda for another strong recruiting week at Wake Forest. The Demon Deacons are currently in the midst of significant recruiting month.

Earlier in the week, back on Monday (May 11), Erik Russell — another 3-star offensive tackle in the 2021 class — committed to Wake Forest, too. Wake Forest, in the span of five days, may have landed its two future, bookend tackles.

Wake Forest won out over offers from plenty other Power Five programs, including several from the ACC: Duke, Louisville, Boston College, Syracuse, Pittsburgh and Georgia Tech. Outside of the ACC, Tennessee and West Virginia were in the mix, too.

Despite play for Boston College High School, Russell committed to Wake Forest over Jeff Hafley and Boston College. The 6-foot-7, 267-pound Russell is a top-15 overall prospect in Massachusetts and rates as the No. 99 offensive tackle in the 2021 class, per 247 Sports.

In the end, Russell picked Wake Forest over BC. With the commitments of Collins and Russell, Wake Forest’s 2021 class now sits at 10 deep. Six of the players committed during the first two weeks of May.

While there’s a small concentration of recruits from North Carolina, South Carolina and Georgia in the class, Wake Forest clearly drew a wide recruiting map for the year. Six different states are represented within the group: south to Florida, all the way up to Massachusetts.