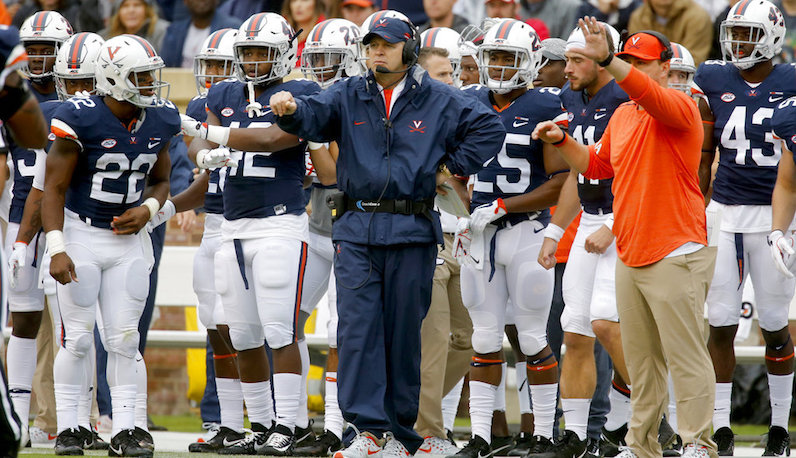 Virginia's head coach Bronco Mendenhall, center, gives a direction as the team plays against William and Mary in an NCAA college football game in Charlottesville on Saturday, Sept. 2, 2017. (AP Photo)

With fifth-year senior cornerback Tim Harris lost for the season, it looks like Virginia football will have to rely on true freshman Germane Crowell Jr. to step into the starting lineup this weekend against Indiana.

The Cavaliers depth chart is becoming crowded with freshmen, both redshirt and true, as Bronco Mendenhall and his staff look to a youth movement as they try to turn the program around.

Crowell, whose father is a former Virginia star who played five years in the NFL, arrived on campus in January and participated in spring drills. The 6-3, 190-pounder was highly recruited, picking his father’s alma mater over scholarship offers from Penn State, Virginia Tech, Florida, Georgia, Notre Dame and a whole host of others.

So Crowell may be as prepared as possible for the challenge ahead, but the number of first-year players in key spots for the Cavs could be concerning, at least for 2017.

Redshirt freshman Dillon Reinkensmeyer became the first UVA frosh to start at left tackle since 2002, when D’Brickashaw Ferguson took the field as a true freshman. His backup was another redshirt freshman, Osiris Crutchfield, and true freshman Tyler Fannin was also on the two-deep at center. In all, 16 freshmen made their debut Saturday for the Cavaliers against William & Mary.

And that doesn’t include true freshman quarterback Lindell Stone, who is No. 2 on the depth chart behind senior Kurt Benkert.

As Virginia tries to improve on a 2-10 record from 2016, it is just about a guarantee the Cavs will suffer from critical mistakes at times this season. Left tackle, quarterback and cornerback are some of the most pressure-packed positions in the game; two other freshmen, Nick Grant and Brenton Nelson also made their debut at corner over the weekend.

That’s a tough situation to be in. For now, anyway

Realistically, Virginia is not going to compete for an ACC championship in 2017. Even going to a bowl game is a long shot. But the experience young players are gaining this season could really make a difference over the next few years.

The Cavs had 34 total freshmen and sophomore on the two deep for William & Mary. That’s a very young team, but presumably Mendenhall and Co. are looking at a roster loaded with experience in years three, four and five of his tenure at UVA. Game action is a precious commodity for development, and players such as Germane Crowell are going to get a lot of it over the next few months.

Even for a player such as Stone, who the Virginia coaches sure hope doesn’t have to play a lot, the number of reps he’s getting in practice as the No. 2 QB is significant compared to most freshmen who enter an ACC program.

Virginia fans certainly expect, and deserve, to see some tangible improvement on the field this season. But it’s also important to look at where the Cavs are in the rebuilding process and look forward to what these players Mendenhall and his assistants recruited can mean for the future.

6 Names to watch in the UVA AD seach