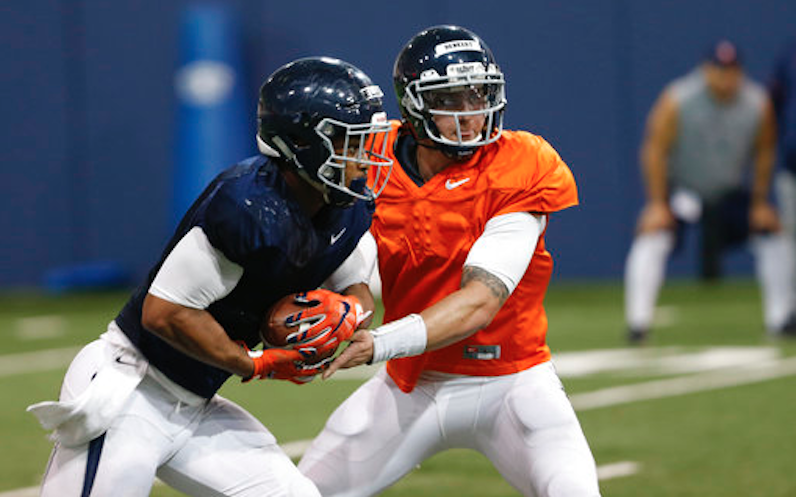 Jordan Ellis (left) is among the players competing for carries in Virginia's backfield this year. (AP Photo)

The 2017 season was a huge step forward for Virginia with a 6-7 record and Military Bowl appearance. But if the Cavaliers are going to continue to move ahead in Bronco Mendenhall’s third season at UVA, they have to improve the ACC’s worst running game.

The Cavs rushed for 93.5 yards per game. North Carolina, next to last in the conference, ran for more than 144 a contest. Virginia’s 10 rushing touchdowns were also easily the fewest in the league.

“We have to run the ball much more effectively than we have been,” Mendenhall said this week after the Cavaliers eighth practice of the spring. “We’ve put a disproportionate amount of time into that in the spring.”

Graduated quarterback Kurt Benkert threw for a school record 3,207 yards with 25 touchdowns, but the lack of balance on offense slowed Virginia after a fast start to the 2017 season and the only points in the final two games came on a 98-yard kickoff return.

But the Wahoos return their two leading rushers — Jordan Ellis and Olamide Zaccheaus — and add a dual-threat element at quarterback with junior college transfer Bryce Perkins.

Ellis rushed for a team-best 836 yards last season, and is universally regarded as the hardest worker on the team; it’s no surprise Mendenhall has touted his continued improvement this spring. He could also see some bigger holes if the Virginia offense becomes less predictable in non-passing situations.

To do that, the Cavs coaching staff seems dedicated to using Zaccheaus, a hybrid running back/wide receiver, more in the running game. Zaccheaus was a favorite target of Benkert’s last season, and turned some short passes into huge gains. But he finished with just 182 yards on 27 carries.

Perkins brings another new wrinkle, as the former Arizona State quarterback has been running the option some in practice.

Of course, for it to matter too much who is carrying the ball, the young offensive line will have to continue to grow up. The Cavaliers return Dillon Reinkensmeyer, Ben Knutson, Jake Fieler and RJ Proctor, who all started at different times last season and will have played significantly more snaps together than the bulk of line at the start of last season.

But shuffling along the line continues with Reinkensmeyer taking over for Fieler at center. Marcus Applefield, a graduate transfer from Rutgers, will likely contend for a starting tackle spot, but isn’t with the team yet this spring, meaning it could take some time for the unit to fully gel this fall.

Still, over Mendenhall’s final five seasons at BYU, the Cougars rushed for 175 yards per game and there are plenty of signs the 2018 Cavs could come closer to looking like a typical Mendenhall team.