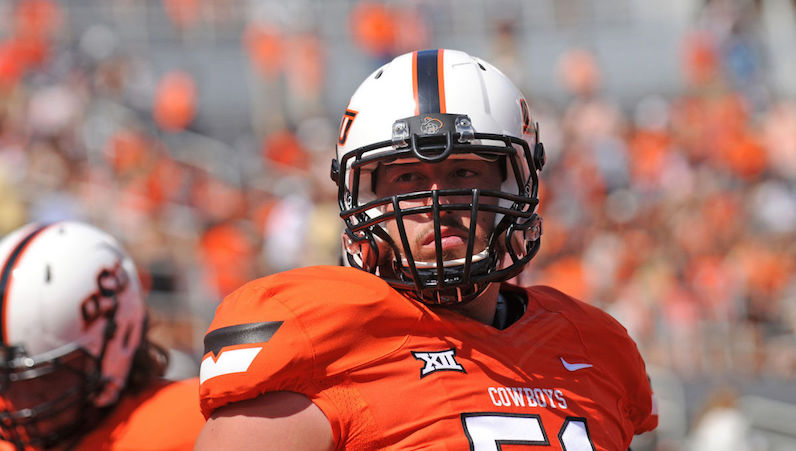 While the Virginia football program is enjoying the continuity it finally has at some positions, quarterback in particular, when it comes to the offensive line the Cavaliers are looking for anything but the status quo.

Good news for the Cavs: the line could look a lot different in 2017

Senior left tackle Jack English could be the only returning starter on the field when the season opener against William & Mary begins Sept. 2. Jack McDonald, another returning starter at right guard was on crutches when fall practice began. McDonald will certainly be in the mix for a starting spot when healthy, but he’s out at least a couple weeks after having his knee scoped.

From a depth and experience perspective, it’s important for UVA football to get McDonald back as soon as possible, but the door is wide open for Virginia’s newcomers to make an immediate impact up front.

Headlining that group is a pair of graduate transfers, John Montelus from Notre Dame and Brandon Pertile out of Oklahoma State.The fifth-year players add some much needed size for the Cavaliers. Montelus came in listed at 6-foot-4, 310 pounds and should have a great opportunity to start at one of the guard spots. Pertile is 6-foot-4 and 315 pounds, and capable of playing both guard and tackle.

Given the lack of size and quality experience the Cavs have returning, it’s a pretty safe bet the grad transfers will take the field with the offense next month. Pertile, in particular, is a player the Virginia staff has always liked. Mendenhall and Co. recruited him heavily while they were previously at Brigham Young.

UVA Football: What about the rooks?

What’s less clear is how many young players will get an opportunity early this season. The Cavaliers may very well turn to freshmen for significant playing time — looking to shake things up after a 2-10 season.

Redshirt frosh Dillon Reinkensmeyer can play both guard and center; he seems likely to land on at least the first or second string units. The Cavs also went heavy on offense of linemen in the most recent recruiting class.

Is Virginia ready to trust true freshmen on a big stage when the season begins? Tyler Fannin could be in the mix at center right away, particularly if Reinkensmeyer is needed at guard. Tackle Ryan Nelson could also see snaps sooner rather than later.

The talent level will almost certainly be better for UVA football, but it’s quite possible nobody on the line when the season begins has played a down together. How fast they can gel will be key, particularly given the jarring lack of depth behind Benkert at quarterback.