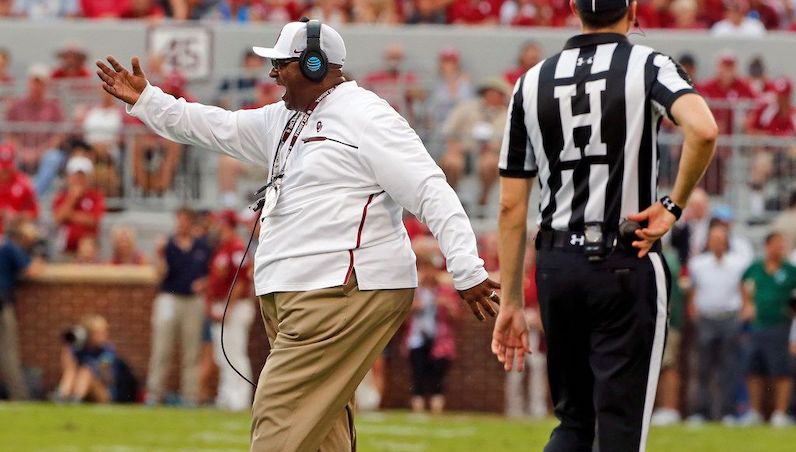 In this Sept. 16, 2017 photo Ruffin McNeill, assistant head coach and defensive tackles coach walks onto the field during a college football game between the University of Oklahoma Sooners (OU) and the Tulane University Green Wave at Gaylord Family-Oklahoma Memorial Stadium in Norman, Okla. (Steve Sisney/The Oklahoman via AP)

Ruffin McNeill, one of the most respected names in all of college football, will head to NC State.

McNeill, 61, spent the previous four full decades coaching football all over the country; most of that experience came at the college level, after four years of coaching high school ball at Lumberton (NC) High. According to NC State, McNeill’s title is special assistant to the head coach.

During his time in college football, McNeill has worked primarily on the defensive side of the ball, while emerging as one of the game’s more trusted voices, especially in the state of North Carolina, where McNeill has deep ties. In the 1990s, McNeill served on coaching staffs at both East Carolina — where he played college football (1976-80) — and Appalachian State.

Welcome to the family, @RuffinMcNeill !!

While on scholarship at East Carolina, McNeill played for legendary coach Pat Dye and served as a two-time captain.

After a decade on staff at Texas Tech — where he coached linebackers (2000-02), special teams (2003- 06) and defensive tackles (2007) and was the assistant head coach (2003-09) — Ruffin McNeill (finally) got his first opportunity to become the head coach of a FBS program. McNeill was hired as East Carolina’s new head coach on January 21, 2010 — three decades into his coaching career.

During his time in Greenville (2010-15), the Pirates were always competitive; over that stretch, ECU posted a record of 42-34 (.553) and went to three straight bowl games (2012-14). McNeill took ECU to a bowl game in four of his six seasons running the program.

The highlight of his tenure came in 2013, when the Pirates won 10 games for just the second time in program history, including wins over UNC and NC State by a combined 38 points.

A year later, the 2014 campaign carried plenty of strong results, too. East Carolina won eight games, including victories over No. 17 Virginia Tech and a 70-41 thrashing of North Carolina. ECU lost by just 10 on the road against South Carolina and dropped its bowl game to Florida by only eight points.

However, following a a 5-7 season in 2015, ECU athletic director Jeff Compher made a decision that stunned the college football universe, firing McNeill in Dec. 2015.

Since McNeill’s departure, East Carolina has won a total of 13 games over the last four seasons (13-35). The program is already on its second coach since McNeill was fired, too.

Less than three years after the decision to fire McNeill, Compher and ECU parted ways.

Following his dismissal from ECU, McNeill joined an ACC staff for the first time in his career. McNeill was hired by Virginia, in 2016, for Bronco Mendenhall’s debut season in Charlottesville. McNeill served as the program’s assistant head coach and defensive line coach.

After one season with the Cavaliers, though, McNeill left to join Lincoln Riley’s coaching staff at Oklahoma. McNeill and Riley spent time together at Texas Tech; when McNeill took the ECU job, he brought Riley on as his offensive coordinator (2010-14). Seven years later, on June 14, 2017, following Riley’s promotion from offensive coordinator at OU (2015-16) to head coach, McNeill joined his former assistant’s staff.

Before all of the high-flying success and Heisman Trophy winners the last few years in Norman, McNeill was Riley’s first hire. The two worked together again for three more seasons, with McNeill serving as the program’s assistant head coach and defensive tackles coach. (In total, McNeill and Riley spent 15 seasons coaching together at three different programs.)

The Sooners hired Alex Grinch to be their new, full-time defensive coordinator in Jan. 2019. McNeill continued to serve as the program’s outside linebackers coach; however, in Jan. 2020, McNeill left Oklahoma. He returned back to North Carolina to care for his 85-year-old father.

McNeill said his decision to leave OU was difficult to make and wouldn’t serve as his retirement. The veteran coach planned to keep doing what he’s best at: coaching. Now, McNeill has the opportunity to bring all of his knowledge and connections within North Carolina to NC State.