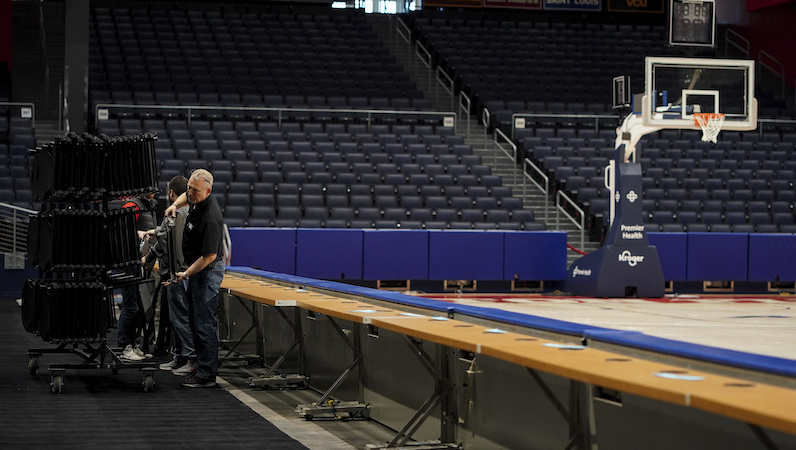 Workers remove chairs from media row inside the arena, Friday, March 13, 2020, in Dayton, Ohio. The coronavirus outbreak has abruptly roused the University of Dayton from its dream of a basketball season. The 29-2 Flyers were rolling into tournament play on a 20-game winning streak that had lifted spirits in an Ohio city battered in the past year by violent deaths and devastation. The NCAA decision to cancel March Madness ended hopes for the small Roman Catholic school's first Final Four appearance in 53 years. (AP Photo/Aaron Doster)

The NCAA has extended the dead period for recruiting back six more weeks — to May 31. Initially, that date was set for April 15, back on March 13. However, the NCAA has pushed that back further in an updated response to COVID-19.

In a tweet this afternoon, the NCAA announced that the Division I Council Coordination Committed and the Division II Administrative Committee elected to move the deadline through the end of May. That is subject to change, too.

This obviously doesn’t mean all recruiting activities must stop; the game is the game, and that will continue. Coaches are still able to correspond with prospects. Recruits may also communicate with potential coaches.

However, there will be no campus or in-home visits.