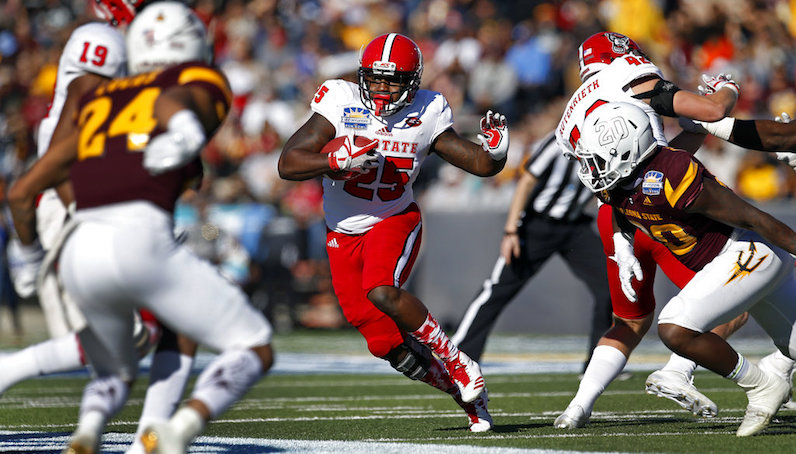 With the 2018 season opener less than three months away for NC State football, the Pack has its sights on 2019. Well, at least for the past weekend, that’s the case.

On Friday, NC State landed 3-star linebacker Drake Thomas, who had offers from Alabama, Michigan and Clemson. Thomas is an in-state product, too.

Over the next 48 hours, though, NC State stayed busy. Later that day, 6-foot slot receiver Keyon Lesane committed to NC State. Lesane — a 3-star prospect who hails from Matthews, North Carolina — plays prep ball for Butler High school, one of the top programs in the state. His commitment to NC State came a day after an unofficial visit to Raleigh.

Next up: Zovon Lindsay, a 3-star defensive tackle from Fayetteville. A 6-foot-4, 266-pound prospect, Lindsay had offers from a handful of nearby schools, too: East Carolina, Virginia, South Carolina, West Virginia and Wake Forest.

This brings NC State football’s 2019 class up to eight players; of that group, seven hail from within the state of North Carolina. 247 Sports ranks all seven of those players as top-60 prospects in North Carolina. Thomas tops that list: the No. 22 player in the state.

It’s early, but those seven in-state commits cover some serious ground for NC State football. If you look at it by area codes, three different numbers are checked: 704, 919 and 910.

The majority of the top-25 players in the state of North Carolina for 2019, according to 247 Sports, remain uncommitted. However, a few of those players have committed to SEC programs — South Carolina, Mississippi State — or Florida State (4-star quarterback Sam Howell).

Currently, NC State has the No. 31 class in Division I and ranks fifth in the ACC.

How do the other in-state ACC teams stack up?

Who knows what it means at the moment, but NC State football has as many North Carolina commitments as the other three in-state ACC programs combined.

Is a new recruiting pipeline developing for Dave Doeren and the Wolfpack?