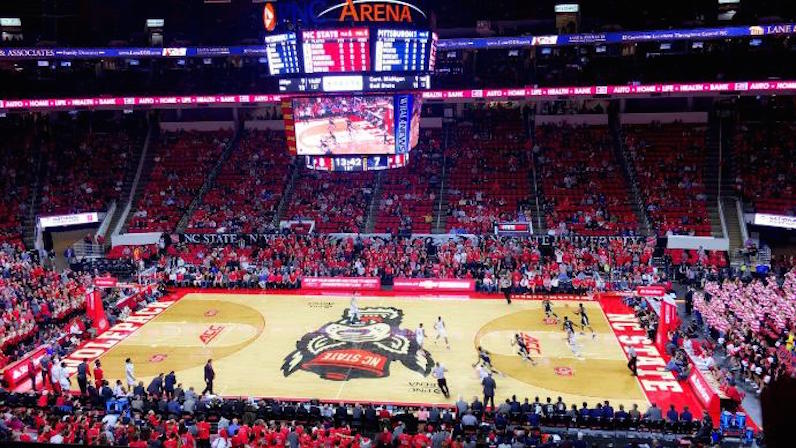 NC State basketball plans to play all 10 home ACC game this season at PNC Arena — along with the team’s final non-conference game: Campbell, Dec. 19. This means a total of 11 games at PNC. The university announced the decision on Thursday (Dec. 3) — in an agreement with the Centennial Authority.

The Wolfpack opened the 2020-21 season back at Reynolds Coliseum. After the win over Charleston Southern, NC State then defeated North Carolina, again at Reynolds.

NC State announces that it will (attempt to) play all 10 ACC games plus its final non-conference game (Campbell on Dec. 19) at PNC Arena. It is scheduled to host Florida Atlantic on Dec. 12 in Reynolds.

NC State was scheduled to play William & Mary this Monday (Nov. 30) in Raleigh, too. However, due to COVID-19 issues within the William & Mary program, that game was called off.

On Tuesday, though, NCSU added another game — this Thursday (Dec. 3) — against UMass Lowell, which will take place up in Uncasville, Ct at the Mohegan Sun.

With NC State starting the season at Reynolds, there was some discussion that the Wolfpack may just want to play all of their home games at the Old Barn. That was mostly conjecture, though NC State did keep the door open. Business responsibilities and safety precautions — added space in the massive PNC Arenas — make it a logical choice, even if it is off campus.

NC State starts ACC play in a little under three weeks: Dec. 22 against UNC, in Raleigh.