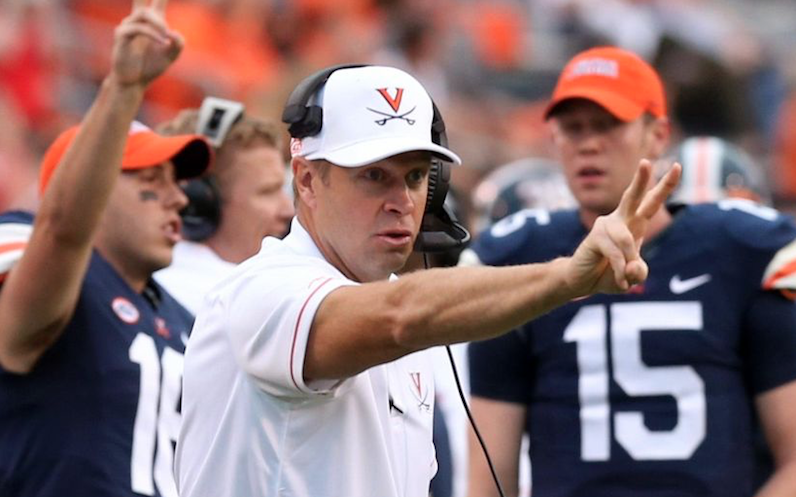 After a prolific recruiting week, Virginia has already racked up 17 commitments for the Class of 2018, which in many ways puts the Cavaliers in great shape moving forward.

Of course, there are some who would say coach Bronco Mendenhall and the Cavs are compiling quantity over quality. Virginia doesn’t have a commitment from a player rated higher than 3-stars by the major recruiting sites and most of the class so far is a mix of 2-stars. A few were even unranked when they accepted the scholarship offer from UVA.

But you can bet fans are getting much more worked up over star rankings than Mendenhall and his staff. After all, the second-year Virginia coach has a history of getting the most out of lower-rated recruits.

What about his time at BYU?

Go back just a few years to Mendenhall’s time at BYU and he brought in a 2-star fullback named Tejan Koroma, who immediately became a freshman All-American in 2014.

Among other 2-stars Mendenhall signed during his time as BYU’s head coach were wide receiver Cody Hoffman, kicker Riley Stephenson and offensive tackle Braden Hansen, who all earned All-America honors with the Cougars.

You can take it a step further and look at Mendenhall’s BYU players who didn’t even merit a star rating coming out of high school by Rivals.com and other recruiting sites.

That group includes Dennis Pitta, who had no Division I scholarship offers, but was invited to walk-on at BYU. The tight end became an All-American at BYU, and if he signs as a free agent will begin his seventh NFL season this fall.

The most relevant former Cougar to Virginia fans right now is Ezekial Ansah — the monster defensive end who was unranked as a football recruit and known mostly for his track and field success coming out of high school.

Ansah, of course, became one of BYU’s all-time greats and was a first round pick of the Detroit Lions.

Ansah’s story was particularly interesting after Virginia picked up a commitment from Georgia linebacker T.C. Harrison. As of last week, Harrison was unranked by the recruiting sites and Virginia is still his first and only scholarship offer from an FCS school.

Harrison may be a bit undersized at 6-3 and just a tad more than 200 pounds. But he has a frame that could support more weight and is a super athlete who is a two-time defending regional champion on the 300-meter hurdles.  That’s not an event at which one succeeds without an impressive mix of speed, explosiveness and stamina.

Rivals quickly moved Harrison up to a 3-star rating after his UVA commitment, but 247Sports still has him unrated and not even among the Top 100 prospects in Georgia.

Not that any of that matters to Mendenhall, and it won’t to anyone else if history repeats itself.