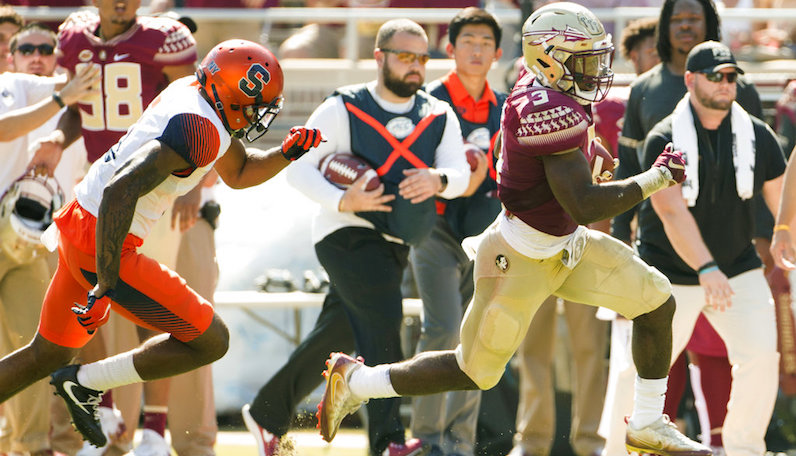 Florida State running back Cam Akers, rights, gets past Syracuse defender Christopher Fredrick for a 54 yard touchdown run in the first half of an NCAA college football game in Tallahassee, Fla., Saturday, Nov. 4, 2017. (AP Photo/Mark Wallheiser)

The Atlantic Coast Conference Football Players of the Week have been recognized following their performances in week 10 of the 2017 season.

Cam Akers had a career-high 199 yards on 22 carries, including touchdown runs of 54 and 63 yards, in Florida State’s 27-24 win over Syracuse on Saturday. Both of Akers’ long touchdown runs came on the opening plays of drives. Akers’ 199 rushing yards are the most for a true freshman at Florida State since 1981. He has three 100-yard rushing games this season, tied for the second-most by a true freshman in FSU history.

The repeat selection as ACC Offensive Lineman of the Week, Hyatt graded 93 percent for 65 plays and had five knockdown blocks in Clemson’s 38-31 win at NC State. More importantly, he did not allow ACC sack leader Bradley Chubb of NC State to record one during Saturday’s game. Hyatt was a big reason Clemson gained 224 yards rushing and finished with 38 points and 415 yards against an NC State defense that was allowing just 116 rushing yards a game entering the contest.

Ishmael caught 12 passes for a career-high 143 yards and a touchdown in Syracuse’s 27-24 loss at Florida State. The Miami native split his production evenly over both halves. In the first two quarters, Ishmael snared six passes for 86 yards, including a 34-yard touchdown that cut the Florida State lead to 21-14. In the second half, Ishmael had six receptions for 57 yards, including a 9-yard grab along the sideline with 11 seconds to play that helped set up a potential tying field goal attempt.

Ferrell had a career-high 12 tackles, including nine first hits and three assists in Clemson’s win over NC State. The sophomore had five tackles for loss, second most in a game by an ACC player this year (the most is 5.5 by Ferrell against Syracuse). Ferrell also had a quarterback sack for nine yards in a key situation. Ferrell is the only player in the nation this season – and the first in Clemson history – to post two games with at least five tackles for loss. Ferrell was honored as an ACC Defensive Lineman of the Week for the second time this season.

Kiser led UVA’s defense with 18 tackles in the Cavaliers’ 40-36 win over Georgia Tech at Scott Stadium. That is the most by any ACC player this season and matched his career high. The Cavalier defense held Georgia Tech to just 220 rushing yards, 128 below its season average. UVA had a season-high five sacks versus the Yellow Jackets and netted the first two interceptions versus Georgia Tech this year. Kiser earned his second ACC Linebacker of the Week honor of the season.

Johnson delivered another standout performance in the secondary to help key a dominant defensive effort as the Hurricanes topped visiting Virginia Tech, 28-10, in a crucial Coastal Division matchup. Johnson tied for the Miami lead with seven tackles (six solo) and wore the team’s “turnover chain” twice – once for a forced fumble in the second quarter and another for an interception in the third quarter. Johnson, who helped Miami hold Virginia Tech to just 299 total yards of offense, has started every game this season at safety and leads all Hurricanes with 58 total tackles (36 solo).

Reed had a huge game returning kickoffs in UVA’s win over Georgia Tech. Reed returned the game’s opening kickoff 57 yards to set up a field goal that gave the Cavaliers an early 3-0 lead. Then, after Georgia Tech took a 14-6 lead with 2:31 left in the first half, Reed took the ensuing kickoff return the distance for a touchdown. His 92-yard return was the eighth longest in UVA history. Reed finished the game with three kickoff returns for 170 yards and 208 yards of all-purpose yardage.

Why a healthy Kelly Bryant makes all the difference for Clemson