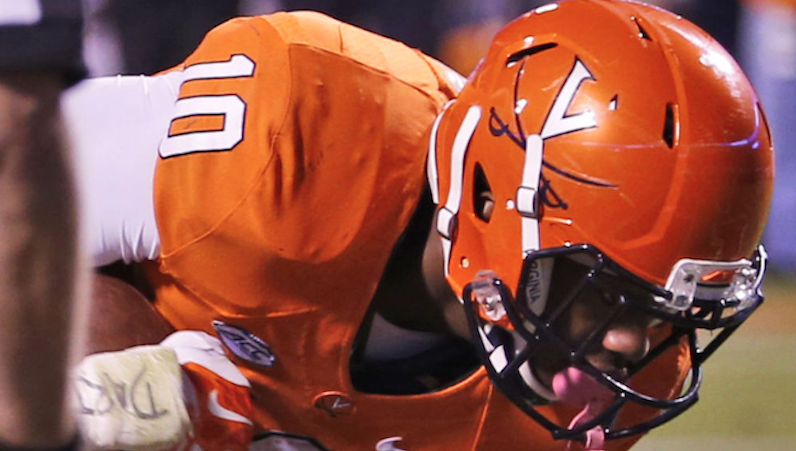 Jordan Ellis has three career rushing touchdowns on only 38 carries in his college career. (AP Photo)

Virginia’s coaching staff says it is hoping to have as many as five running backs prepared to get significant work in 2017, but if there is one who has stood out in the preseason, it is redshirt junior Jordan Ellis.

Ellis played behind Taquan Mizzell and Albert Reid last season and didn’t get a lot of carries. But his work ethic has made a huge impression on Bronco Mendenhall and his assistants since they arrived before last season.

Since Mendenhall’s arrival, Virginia has allowed players to choose jersey numbers via a selection process similar to the NFL Draft. Players vote to determine the players most deserving of the top picks, and Ellis has gotten to choose first each of the past two seasons.

Ellis, along with senior Daniel Hamm, will be asked to carry a much bigger load this season, but producing just 135 rushing yards and two touchdowns in his career to this point, Ellis has made a significant impression on his teammates. To them, it’s simply his turn to shine.

The Georgia native has become one of Mendenhall’s favorite players because of the quiet, but determined way he goes about his work.

“His impact is kind of hard to describe, because he doesn’t say anything,” Mendenhall said. “He and I get along really well. He works really, really hard. His influence comes from how he works and who he is.”

Ellis will also bring a style to the field that differs from what defenses saw from the speedster Mizzell, who rushed for nearly 1,000 yards last year.

Playing behind Mizzell and Reid last year, Ellis took the opportunity to make his mark on special teams while also making the most of any opportunities he got on offense. He carried six times for 46 yards last year at Oregon and two years ago as a redshirt freshman he carried the ball three straight times, playing into the end zone to give the Cavs an overtime victory against Syracuse.

“We had two seniors that were taking the majority of the reps (last season),” Virginia running back coach Mark Atuaia said. “In my room, you have to play special teams, there’s no way around that. So for Hamm and Jordan last year, it was making their mark in that realm. And for Jordan coming in for some big back duties, it was evident he was going to come through this year and be somebody.”

With his time finally here, by the end of the season Ellis could be as widely respected across the ACC as he’s always been in Virginia’s locker room.