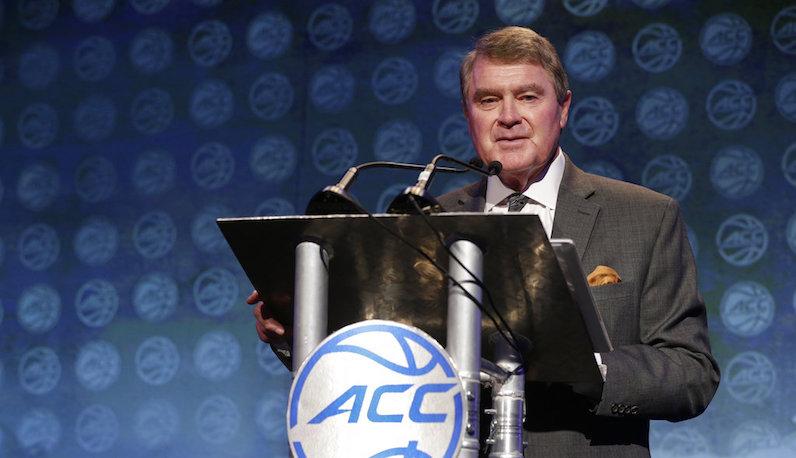 Charlotte — At ACC Operation Basketball, league commissioner John Swofford addressed a variety of topics at one of his league-wide speeches.

Swofford hit a variety of topics, which included referee alliances, the launch of the ACC Network and the one-and-done rule.

One of the topics of priority, too: the FBI’s investigation in NCAA basketball.

According to John Swofford, things are progressing nicely for the 2019 launch of the ACC Network. Activity is underway across the league’s 15 campuses, and the ESPN facilities up in Bristol. The network, when it launches, will reportedly reach well over four million.

Swofford mentioned that in terms of operations and production quality, the league is well-situated

This is an ideal scenario. The Bristol studio will provide our network with access to the latest innovations and technology available, while many of the network executives with whom we interact on a daily basis will be here in Charlotte and therefore easily accessible to our office and our personnel in Greensboro.

Inevitably, the disclosure of the FBI’s investigation into corruption in college basketball was addressed. Commissioner Swofford was deeply disappointed, but said everyone is working towards a resolution.

The charges filed by the Federal Government are truly disturbing to me, to our schools, and all those connected to college athletics that are dedicated to following the rules. There’s still much to learn, but if found to be true, the individuals involved need to be held accountable

Rick Pitino was officially fired less than two weeks ago for his connection to the charges; it’s the third scandal that’s mired Pitino’s tenure at the school. It’s also the second one since Louisville entered the league in 2014. Pitino was suspended for the program’s infamous escort scandal back in 2016.

When asked if he regrets adding Louisville to the ACC, Swofford was succinct:

Part of the process for cleaning up college basketball, according to Swofford, is the elimination of the one-and-done rule. That requires serious conversations with the NBA, but Swofford hopes to see it done away with — at some point in time.

I think getting rid of one and done is better than having it. I think taking a look at the baseball model is worth doing. I can’t tell you I think that’s a solution, but signing out of high school or going to college for three years, you know, that’s something I think to look at. Baseball has more liberal agent rules.

Duke basketball ranked as the ACC’s best in KenPom projections