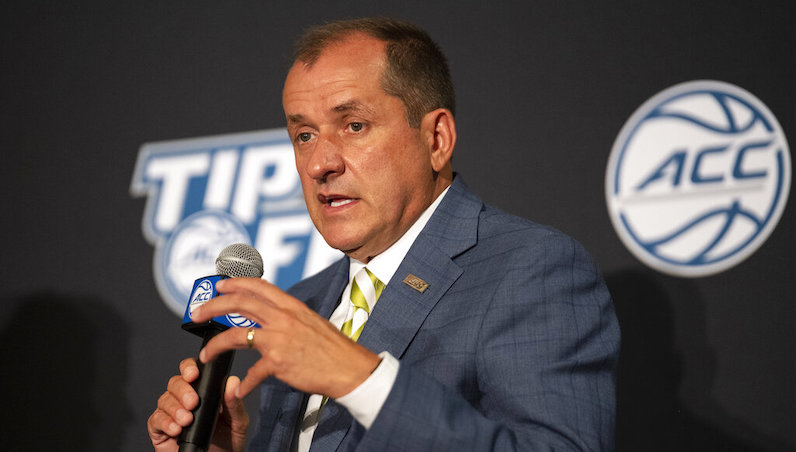 According to a report from Luke DeCock of The News & Observer, Charlotte and Orlando have emerged as the top two options for the new headquarters of the ACC. Greensboro, which has been home to the ACC for 68 years now, remains in consideration, apparently.

A vote on the decision will take place before the end of April.

This nothing new; going back to last year, the ACC has been in the market for a new “official” home for a while now, although the mention of Orlando is a little bit of a head-scratchers.

However, both Charlotte and Orlando check a variety of boxes the league outlined as necessary for its future headquarters.

It certainly doesn’t hurt that both cities are host sites for bowl games with ACC ties. Charlotte is also home to the ACC Football Championship Game. It’s hosted the ACC Tournament on several occasions, too — most recently in 2019. Charlotte is also the site for several of the ACC’s major media events, like Operation Basketball and the annual football kickoff.

Charlotte and Orlando are the front-runners for the ACC's new headquarters. Decision expected by the end of the month. Greensboro the third finalist.https://t.co/bJ6sMlyoFS

On paper, Charlotte makes the most sense — if the league refuses to remain in Greensboro. However, as DeCock notes in his story, the city of Orlando has significant connections with ESPN, the league’s partner for the ACC Network. Disney, of course, owns ESPN and operates the ACC Network. Disney has amusement parks and its Wide World of Sports campus in Orlando.

Back in 2016, Orlando also hosted the ACC Football Championship. This occurred when the title game left Charlotte due to the disastrous House Bill 2 in North Carolina.

Recently, the state of Florida passed the intentionally-cruel “Don’t Say Gay” law, a form of anti-LGTBQ legislation that bars public schools from teaching about sexual orientation or gender identity for students in kindergarten through third grades — or “in a manner that is not age-appropriate or developmentally appropriate for students in accordance with state standards.”