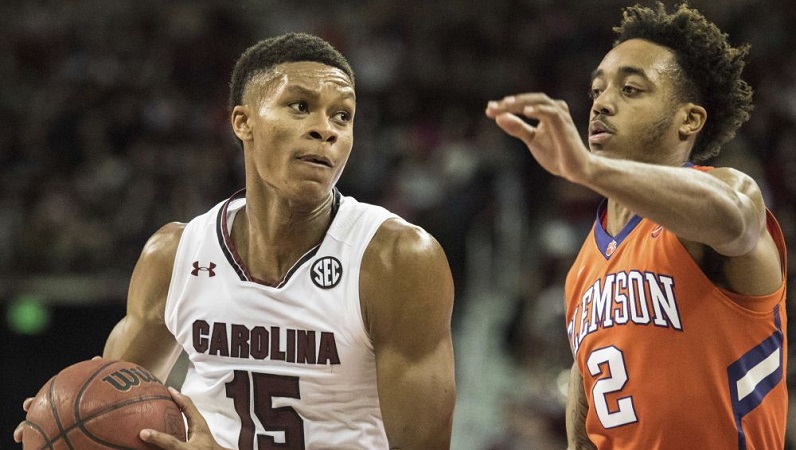 Non-conference rivalry games such as Clemson vs. South Carolina could be come less frequent with new scheduling requirements coming for the ACC. (AP Photo/Sean Rayford)

Although it’s not getting a great deal of attention at the moment, ACC basketball will be entering a new era in 2019-20. That season, the ACC will begin a 20-game league slate, which will change the landscape of the league’s non-conference scheduling.

Several ACC head coaches are already looking at the potential impact of the 20-game ACC regular season schedule, and how they’ll have to adapt in scheduling in the future.

“Yeah, you have to think about it,” Virginia head coach Tony Bennett said. “It’s a great league, and you’re adding two more high-major games. Big games. You’ll have the Big Ten-ACC Challenge. The multi-tournament events, all that. It’s going to be interesting to see the philosophies on it. Twenty games is a lot. So I think it will impact non-conference scheduling to a certain extent.”

“You know what? It has to (affect your scheduling). It’s not really twenty games. It’s really 21 games (including the ACC-Big Ten Challenge),” Boston College’s Jim Christian added. “Yeah, it does (affect scheduling). You’ve got to really evaluate your team, because you don’t have a lot of opportunities beyond that (the ACC regular season schedule). What are you trying to do in the non-conference?”

Major college programs can schedule a maximum of 30 regular season games, not including potential exempt games such as playing in an early-season tournament.

With two additional ACC regular season games, teams will be forced to restrict their non-conference scheduling.

In many instances, it could mean the end of longstanding local rivalries.

Pittsburgh will have a tougher time scheduling Penn State. Boston College will have a harder time scheduling Harvard and other Northeastern foes. Large state schools, such as UNC and NC State, will have to scale down from the large pool of in-state non-conference opponents at their disposal. Clemson and South Carolina may not get together as often on the hardwood.

“It (the 20-game ACC regular season) will change dramatically what we’re able to do with our non-conference schedule,” Pitt head coach Kevin Stallings said. “Some games that we’ve traditionally wanted to play, we’re probably not going to be able to play. Because you’re going to start the conference season in early December.

“Some of those traditional rivalries that we’ve had – and I’m not just talking about Pittsburgh, but across all of college basketball – I think you’re going to see some of those go by the wayside. Just because we can’t afford to continue to play in those games, when we have eight total non-conference games that we can schedule.”

Also in play with non-conference scheduling will be weighing rivalry games versus games that will look better on a NCAA Tournament resume. The NCAA Selection Committee is putting more emphasis on non-conference road victories. With that in mind, some ACC teams may try to find more challenging non-conference opponents rather than maintaining certain rivalries.

“When you start going to 20 games – my question is going to be, okay, when we go to 20, what are they going to do, the (NCAA) Selection Committee, with the non-conference strength of schedules?” Christian said. “And who do you decide to play (in the non-conference)? You’ve got two extra (conference) games (in the ACC) that they’re not getting (in other conferences). My personal opinion is that everybody (all the major conferences) will go to 20. Usually that’s what happens. But it’s going to be interesting to see.”

“There’s a lot of rivalries in non-conference,” Christian added. “You get used to playing certain people. You’ve got exempt tournament decisions to make now. You’re going to play 20, maybe 21. Do I want to go play against three other high-majors? That’s 24 of my 30 games. Is that good or bad? It’s going to be interesting to see what the Committee will say to that. They’re talking about weighing non-conference road wins. Now you’re asking me to go play on the road wherever. It’s going to be interesting to see how those two things go together.”

“It’s almost like a mathematical equation when you’re making non-conference scheduling,” UVa’s Bennett added. “How to prepare yourself. How to discover things about yourself. Sometimes you can overdo it. I’d probably rather overdo it than underdo it. If you’re good in the conference, that can take care of itself. I don’t want to say no matter what happens in non-conference. But you always have a chance to try to right the ship. And that’s always easier said than done in league play.”