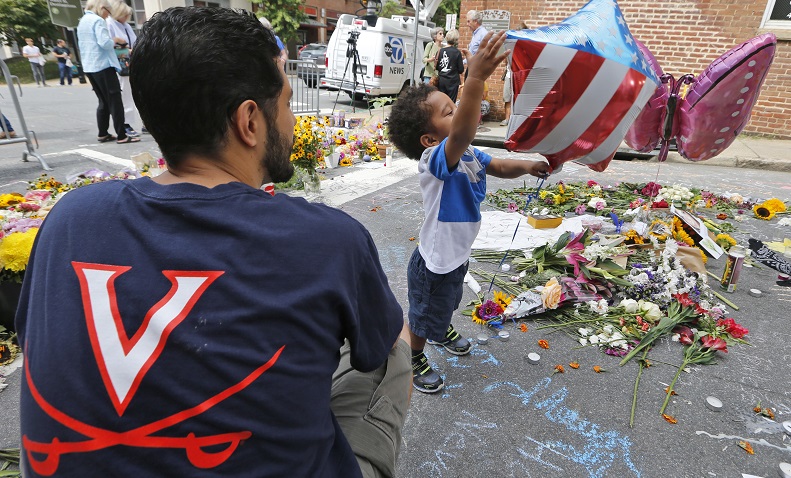 Pastor Daniel Xisto, of Charlottesville, and his son Max, 2, look over a makeshift memorial Monday, Aug. 14, 2017, for Heather Heyer, who was killed in a car attack on Saturday after a white nationalist rally in Charlottesville, Va. (AP Photo/Steve Helber)

In the immediate aftermath of Saturday’s White Supremacist rally, which somehow devolved even further into a full blown riot and terrorist attack on the streets of Charlottesville, wondering about sports or even the day-to-day operations of the University of Virginia can seem trivial.

But we’ve also seen time and again in this country that tragedy often highlights the way sports are woven into our national fabric. When the Virginia Cavaliers take the football field Sept. 2 against William & Mary, it has potential to be a healing moment of celebration, a community coming together, similar to Virginia Tech’s first game after the mass shooting on campus in 2007.

For a city and a school home to national championship programs in baseball, lacrosse, soccer and tennis; where UVA basketball has never been bigger and Saturday’s at Scott Stadium are as much a part of the autumn as the leaves changing atop Afton Mountain, sports will signal a return to normalcy.

But at some point, it’s fair to begin to wonder what it all means for various Cavalier programs. These terrible events can have long-lasting effects on college towns, their institutions and their economies.

This summer, The New York Times chronicled the ongoing troubles at the University of Missouri, two years after protests and unrest shook that campus and the city of Columbia, Mo. Mizzou didn’t even suffer the same kind of violence and mayhem seen Saturday in Charlottesville, but enrollment is down 35 percent, more than 40 percent among African American students. The university closed seven dormitories and laid off 475 workers.

Not everything on that list can necessarily be attributed to the protests and clashes on campus, but it’s hard to deny an overall downward trend.

The situations aren’t exactly the same. Charlottesville and the UVA Grounds were invaded by outsiders from across the nation in response to the city deciding to take down Confederate monuments. The problems at Missouri stemmed from tensions among students and local residents, and inaction from the administration. Virginia’s leaders have met this head on.

But Saturday’s tragedy, and other events of the summer, won’t make life any easier for UVA coaches. Word association for Charlottesville paints a different picture now. Reminders of Saturday won’t quickly fade.

Samantha Brunelle, a No. 1-rated women’s basketball recruit has Virginia in her Top 11 schools. She also attends the same high school Heather Heyer, who was killed in the chaos Saturday, once did. Take to Google looking for UVA basketball recruiting target David Duke, and you have to sort through results about ex Ku Klux Klan leader David Duke, who was in downtown Charlottesville during the riots, to find out the basketball playing Duke took Virginia off his list Monday.

Virginia football’s Meet the Team Day was canceled Saturday, but university activities have now resumed. Who knows what happens next?