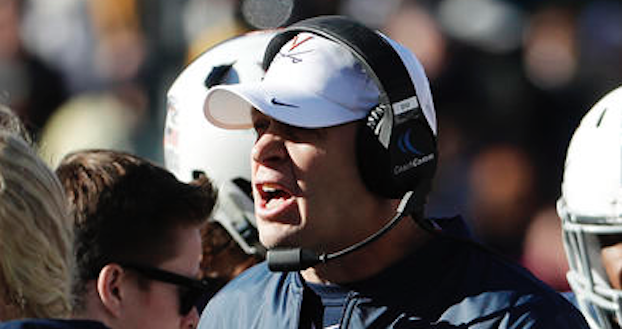 The Liberty Flames’ upcoming move to FBS will soon come with a three-game series against Virginia football.

The two programs announced the series last weekend. The Cavaliers will host Liberty in 2018 and 2019 before traveling to Lynchburg for a 2027 matchup.

It’s a particularly huge deal for the Flames to play one of the state’s ACC programs. However, it’s also notable for the Cavaliers, who seem to be shifting their scheduling philosophy.

But that approach has also resulted in a lot of losses, which in turn led to declining ticket sales. Now it looks like the Cavaliers are scheduling with bowl eligibility in mind.

This year’s slate includes a return trip to Boise State. However, the rest of the nonconference games are at home against William & Mary, UConn and Indiana. The next two years, the Cavs have games against Richmond, Indiana, Ohio, Liberty (twice), William & Mary and Old Dominion.

Under Bronco Mendenhall, Virginia is putting itself in better position to notch the six-win mark in future seasons. There’s still a game against Georgia in Atlanta in 2020 and the quasi-conference games against Notre Dame every few years. But for the most part, the schedule won’t be an excuse going forward.

Still, it’s interesting to look at UVA’s approach to scheduling the state’s FBS newcomers: Old Dominion and Liberty. The Cavaliers are giving each school a return game in exchange for two home games. That makes a certain level of sense with ODU, which has established itself as a contender in Conference USA. Playing a game in the Hampton Roads area means visiting an area heavy with alumni and recruits, but that isn’t a particularly quick or easy drive from Charlottesville.

Making the same arrangement with Liberty is a bit more surprising. Lynchburg is just a short ride south on US-29. The school’s stance on homosexuality, evolution and other topics has hampered its ability to find a new conference even as the university pumps gobs of money into the athletic department.

It’s hard to see exactly where Virginia benefits from scheduling that series. But overall, the Cavaliers are taking a smart new approach to scheduling. It’s up to the players and coaches now to take advantage.

Virginia will enter 2017 with a dynamic QB-WR combo