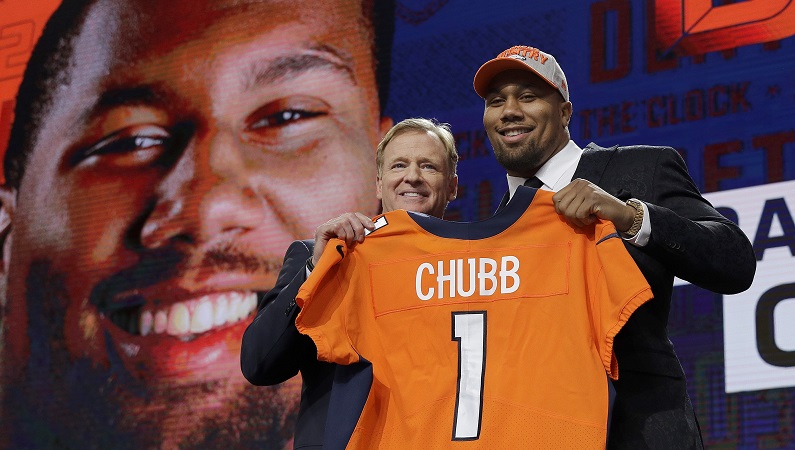 Six Atlantic Coast Conference football players were chosen in the first round of the 2018 National Football League Draft Thursday night at AT&T Stadium in Arlington, Texas.

The six selections bring the ACC’s total to 79 first-round draftees in the last 14 years, beginning with the 2005 draft.

NC State defensive end Bradley Chubb was selected fifth overall by the Denver Broncos. The 2017 ACC Defensive Player of the Year, Chubb was a consensus first-team All-American who set the NC State career with 60 tackles for loss and 26 sacks. Chubb broke the records previously held by Mario Williams, the No. 1 pick in the 2006 NFL draft.

Chubb is the Wolfpack’s 16th overall first-round draft pick and the highest selection from NC State since Williams in 2006.

Virginia Tech linebacker Tremaine Edmunds was taken 16th overall by the Buffalo Bills, Florida State safety Derwin James was picked 17th by the Los Angeles Chargers, and Louisville cornerback Jaire Alexander was picked 18th by the Green Bay Packers. With the final pick of the first round at No. 32, Louisville quarterback Lamar Jackson was picked by the Baltimore Ravens.

Edmunds is Virginia Tech’s 10th overall first-round selection and first since cornerback Kyle Fuller was the 14th pick in 2014.

For the first time since 2014, Louisville had two players selected in the first round – Alexander at No. 18 overall and Jackson at No. 32.

Read more: Which ACC athletic director makes the most money?