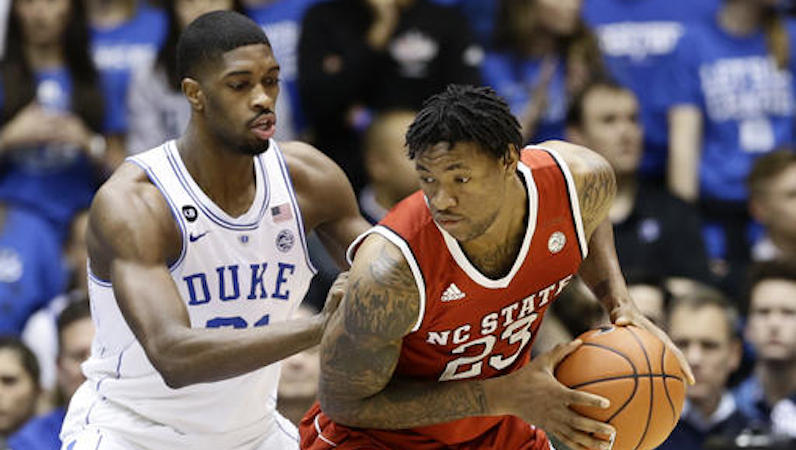 According to ESPN, Ted Kapita (right) is likely to sign with an agent, thus ending his NC State basketball career. (AP Photo)

ESPN’s Jeff Goodman reported that Kapita is likely to sign with an agent and pursue a professional career.

Word behind the scenes had been that few people at NCSU knew Kapita’s intentions when he entered the NBA Draft. While undecided freshman center Omer Yurtseven has been more open in his communications with the new coaching staff, Kapita remained more of a mystery. (Yurtseven reportedly sits at “50-50” on his decision.)

Kapita has led a nomadic basketball career. NC State was the third school he either signed with or committed to. His original intention was to go to Arkansas. However, Kapita did not qualify. He then committed to SMU, but around this time last year, he signed with NC State.

When he did not originally qualify after signing with Arkansas, there were rumors that Kapita would try to catch on with a professional league in France or a start-up in Las Vegas. The big man ultimately played a prep year at DME Academy in Daytona Beach, Fla., his third high school. Kapita then undertook a lengthy NCAA review that did not reach a resolution until shortly before the season opener. He sat out that game as a precaution since the questions lingered until just before tipoff.

Kapita leaves NC State with rising seniors Lennard Freeman and Abdul-Malik Abu in the post. In addition, sophomore Darius Hicks is another frontcourt piece as an undersized option.

Yurtseven has until May 24 to decide whether or not he’ll return to school.