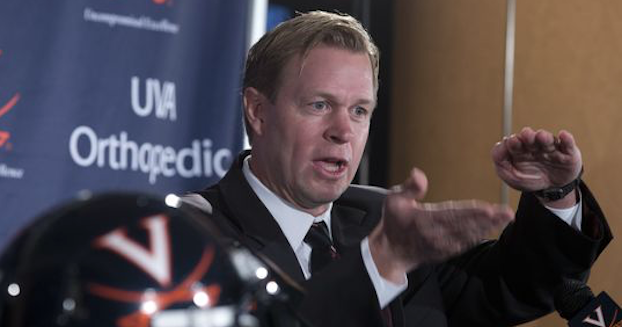 Bronco Mendenhall and his staff are aiming high in the 2018 class. (AP Photo)

Coming from Provo, Utah, Bronco Mendenhall and his staff have had to work overtime the past several months on the recruiting trail in order to promote their specific brand at UVA. So far, they’ve been able to sell the dream to 19 prospects who are projected to sign in December or February.

While it’s comforting to head into a new football season with a recruiting class almost completely intact, one concern that can’t be entirely overlooked is the fact that it isn’t a highly regarded group among national analysts.

College coaches will be quick to say that recruiting rankings don’t mean everything. And that’s true.

There are stories across every single ACC campus of highly ranked prospects who turned into duds in the face of the rigors of major college football, while others who may have walked on or been lightly regarded blossomed into starters or even All-ACC-caliber talents.

At the same time, those schools that are consistently at the top of team recruiting rankings are often littered among the top 10 when fall arrives. It’s no coincidence that Florida State and Clemson are regularly rated among the top two or three ACC schools in recruiting and are annually doing battle for league supremacy.

What type of classes to former head coach Mike London bring to Virginia? To find out for free, sign up for basic access to ACCSports.com.