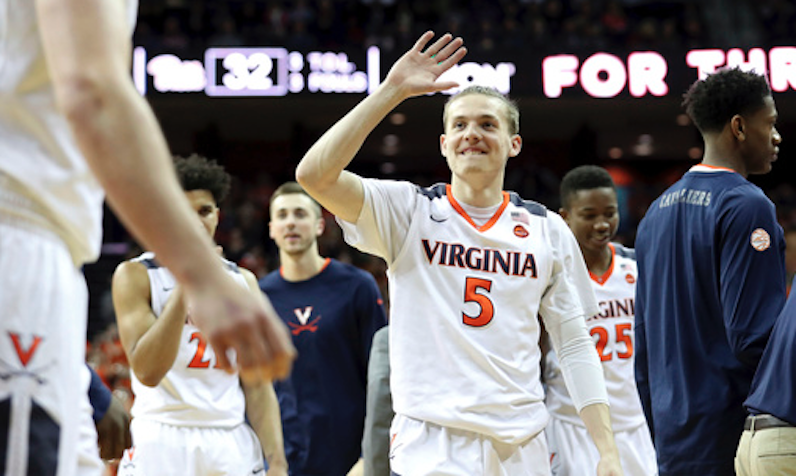 Virginia is at its best when Kyle Guy's shots are falling. (AP Photo)

If nothing else, the early rounds of the ACC Tournament are usually good for some mild, relatively meaningless controversies to discuss until Selection Sunday.

To recap: Late in Thursday night’s quarterfinal loss to Notre Dame, the ESPN cameras caught Guy on the bench grinning despite a terrible shooting night in a game in which the Cavaliers trailed by double figures most of the second half.

And of course some fans and pundits took offense, including Yahoo’s Pat Forde. Why wasn’t the UVA freshman more upset his team got blown out while he shot 0-of-8 from the field?

Well, as always, context is key. For one thing, Guy seemed to be having a genuinely positive reaction to teammate Jarred Reuter playing well for the Cavs in the final minutes, which makes sense considering Reuter has had perhaps the worst season among players in Virginia’s regular rotation.

Beyond that, let’s honestly examine the situation from a Virginia perspective. The Cavaliers are solidly in the NCAA tournament field and had beaten Pittsburgh the night before to cap a four-game winning streak, a stretch in which Guy was their best player.

So with more than one player on the team recovering from illness, the Cavs didn’t have a ton of energy on the second night of back-to-back games. Deep down, there probably weren’t too many in Virginia’s locker room devastated by the idea of getting an extra day or two of rest back in Charlottesville.

But the biggest factor to consider is where Guy’s head is. This is a streaky shooter who has had some extreme highs and lows in his first season. If he was displaying negative body language after such a game, that would have been scrutinized as well.

Guy is going to be key for Virginia’s hopes of making it past the first weekend of the NCAA tournament. When he’s shot the ball well, the Cavaliers have been one of the toughest teams in the nation to beat. He averaged 15.5 points per game during Virginia’s four-game surge.

But the Cavs’ worst points in the season have coincided with Guy’s worst cold streaks. He scored three points total during three straight losses in the back half of February, and there was concern, at least among pockets of Virginia fans, he had grown frustrated and might consider a transfer.

The Cavs have still won four of their past five, a stretch that includes a thorough destruction of a North Carolina team that’s gunning for a No. 1 seed in the Big Dance.

If Guy wasn’t devastated, perhaps it’s a sign Virginia fans shouldn’t be either.