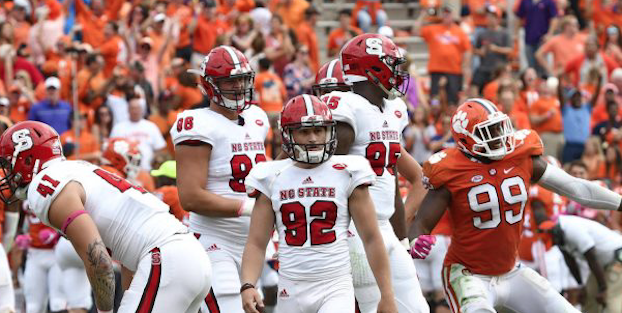 First it was Connor Haskins, then Kyle Bambard and now Haskins again.

NC State’s revolving door at kicker continues as the Pack desperately tries to find a reliable performer for the final three games of the season.

NC State needs two wins to reach bowl eligibility in that stretch, yet if it had a reliable kicker for the first nine games it may not be in that position.

The struggles are most identifiable by Bambard’s 33-yard field-goal miss as time expired in what was ultimately a 24-17 overtime loss at Clemson. But the issues extend beyond that.

In a 33-30 loss at East Carolina, Haskins missed from 44 and 42 yards during the first half — six points left off the board that loomed significantly in the final outcome. That’s not to say Haskins’ misses decided the contest; ECU had its own kicking issues with a missed field goal and extra point. But NCSU can point to its own misfires among numerous other miscues that cost the Wolfpack.

Last Saturday, a missed 31-yarder by Bambard was the final straw, giving Haskins a second opportunity. That was Bambard’s fourth miss from less than 40 yards this season (to be fair, one was in awful conditions against Notre Dame, and another was blocked after the offensive line collapsed on an assignment).

If Bambard makes his kick against FSU, NC State may not have needed a touchdown toward the end when its final drive stalled at the Florida State 26-yard line.

Even in the 21-14 loss to Boston College, head coach Dave Doeren showed a lack of confidence in the kicking game by choosing to go for it on 4th-and-1 at the Boston College 29 with 19 seconds left in the first half. A field goal would have tied the score 10-10 going into halftime, potentially changing the complexion of the second half.

NC State is averaging just 14.8 points per game in its last five contests (counting a 10-3 win over Notre Dame). Inefficiency in the red zone and kicking game, which partly go hand-in-hand, have played a role in that.

The Pack is 7-of-14 kicking field goals this year. Only three teams (Marshall, Central Michigan and Duke) in the FBS have made a lower percentage of their attempts. Out of 128 teams, NC State is also 114th in red-zone scoring percentage (75.0 percent).

Doeren has repeatedly talked about how close his team is to turning a corner despite its 4-5 record, and he may have a point. It could be as close to simply having a reliable field-goal kicker.

NC State has a verbal commitment from a highly touted kicker that some regard as the best in his class: Christopher Dunn from North Davidson High in Lexington, N.C. However, Dunn is only a junior in high school.

The Pack will need to find another answer between now and then.