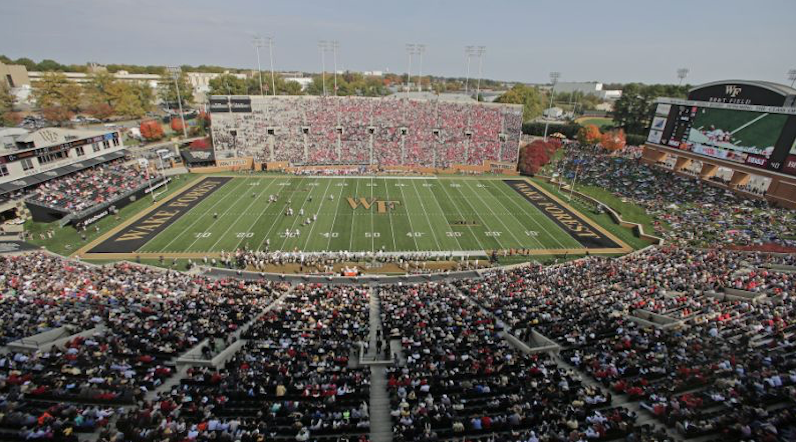 After defensive back Tyriq Hardimon flipped from Cal to Wake on Monday, the Deacons landed in-state receiving star Sage Surratt on Tuesday.

Surratt rewrote the North Carolina high school record books as his season numbers of 129 catches for 2,102 yards and 28 touchdowns capped a career with 366 catches for 5,924 yards and 80 scores. Those numbers led Surratt, who finished his career at Lincolnton High School, to be named the N.C. Associated Press Offensive Player of the Year.

Surratt also could be named the state’s top basketball player as he’s one of the top scorers in the nation. However, when announcing his commitment, he said he would concentrate on football at Wake Forest.

At 6-4, 210 pounds, Surratt gives the Deacons a big, athletic receiver with excellent hands and leaping ability. Although he’s not a burner, Surratt can be elusive.

Surratt originally committed to play football and basketball at Harvard. However, he reopened his recruitment in December, looking for something closer to home.

He’s ranked No. 207 as a receiver in 247Sports’ composite rankings. (Interestingly, 207 also was the ranking of current Wake receiver Cortez Lewis when he was recruited.) Surratt also looked at Duke and UNC.

Surratt has ties to UNC, where his brother, Chazz, redshirted as a quarterback this past season. However, the Tar Heels never extended a firm offer.

Chazz, who completed 237 passes to Sage in three seasons at East Lincoln, caused a stir a year ago by flipping his commitment from Duke to UNC. At the time, reports surfaced that he and Sage had been promised both football scholarships and “preferred” walk-on status for basketball. Chazz is not playing basketball this winter.

It will be interesting to see if basketball comes up again, considering the Deacons could use the help. However, Surratt sees his football skills as the road to his future.

“I have been focusing on football,” he told the Charlotte Observer recently. “It’s definitely going to be football first, but basketball can be a possibility, but football is my main priority. I always said I’d go with whatever was the best opportunity between the two sports. I felt like football had the better opportunity for me to play at a higher level.”

Surratt is the second receiver in the 2017 class, following another in-state prospect: Jaquarii Roberson of Ahoskie.

Neither receiver is likely to play right away as the Deacons are well-stocked at the position. Wake will be led by rising juniors Lewis (79 career catches), Tabari Hines (70), Chuck Wade (57) and Alex Bachman (23 catches last season).

Two redshirt freshmen — Scotty Washington and Steven Claude — didn’t make much of an impact this year. However, both were highly ranked recruits, and Washington closed with five catches for 57 yards in the bowl game.

The Deacons had three freshmen receivers in Jeremiah Brown, Malik Grate and Greg Dortch this season. Brown was an early enrollee who impressed the staff, and Dortch’s speed probably will get him time as at least a return man next season.